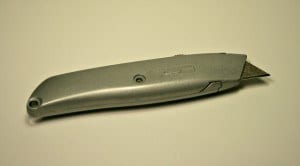 Will congress debate banning knives next?

A mass stabbing at Lone Star College that took place earlier this week is transforming the gun control debate, just as Congress voted to address legislation to ban high capacity clips in the Senate.  Dylan Quick, the chief suspect in the case, allegedly wielded a box-cutter as he targeted students’ faces and throats at the college Monday.

In the attack, 15 students were wounded, with four believed to be in critical condition.  Though access to the campus was limited immediately following the rampage, photographers were able to capture photos of students on gurneys, ready to be loaded into ambulances on their way to local hospitals.

The suspect, 20-year-old Dylan Quick, is now on suicide watch in the Harris County Jail, possibly suffering from a psychiatric disorder, according to his attorney.

“The judge signed an order yesterday to put him under suicide watch to make sure he doesn’t hurt himself,” said attorney Jules Laird.

The attorney also said that Quick’s family is “devastated” by accusations that a member of their family allegedly committed such a terrible crime.  They are thinking about the victims.

“They want the all of the people who have been injured and their families to know they are sending their heartfelt wishes to them and hope they have a speedy recovery,” Laid said.

Laird said a fantasy about a mass stabbing led him to use an X-Acto knife and scalpel in the mass stabbing at Lone Star College Tuesday.  He told police that he had been fantasizing about stabbing people since he was 8 years old and that he had been planning the attack for quite some time, according to Harris County Sheriff Adrian Garcia.

Quick was expected to appear in court Thursday but did not appear.  Laird says that she would like her client to be reviewed by mental health professionals at the jail before he officially requests a bail reduction.  Concerned about his mental state, a magistrate judge has ordered that Quick be held without bail.

If Quick does make bail, he may be held in a “locked down” detention facility, according to The Chron.