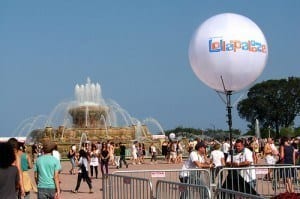 Eminem..? Skrillex? Kings of Leon? Arctic Monkeys? How soon will we know?

Yesterday, March 18th, the Chicago Tribune announced that Eminem, Skrillex, Kings of Leon, and Arctic Monkeys are all rumored to be headlining the 2014 Lollapalooza festival. The Tribune cites “industry sources” (which remain anonymous) for providing the information. However, the festival producers will announce the official lineup next week. A representative for Lollapalooza unfortunately declined to comment when asked about the headlining rumors.

Assuming the headlining rumors are in fact true, it’d be interesting to note that none of the headliners would be new to Lollapalooza. Eminem headlined the festival in 2011, which coincidentally happened to be the same year Skrillex first came onto the Lolla scene; Kings of Leon headlined in 2009, and Arctic Monkeys headlined in 2011 during an afternoon set.

Lollapalooza is a three-day festival, which takes place from August 1st to August 3rd in Chicago’s Grant Park, and features more than 100 artists on eight stages. Last year’s Lollapalooza drew a reported 300,000 concertgoers, so be sure to prepare yourselves for some spectacular shows and plenty of drunk, sweaty bros in brightly-colored tank tops.