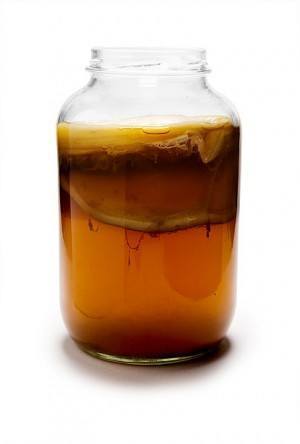 Kombucha tea has become exceedingly trendy lately amongst the healthfully conscious, and stars such as Lindsay Lohan and Madonna have even been spotted sipping on the tea. But is it really the magical cure-all it claims to be?

The beverage has been around for more than 2,000 years; in fact, the ancient Chinese called Kombucha the “Immortal Health Elixir.” Kombucha is a colony of bacteria and yeast, which is then added to sugar and tea and allowed to ferment in order to produce what is known as Kombucha tea. The tea is available commercially and can also be made at home.

Advocates of the brew claim that Kombucha detoxifies the body, increases energy, sharpens eyesight, aids joint recovery, improves skin elasticity, aids digestion and even prevents and fights cancer and arthritis. There is little published research done on the benefits.

As of yet there have not been any published case-controlled studies and no specific links have been established in relation to effect of central nervous system, liver, metabolic acidosis, and toxicity in general.

Several cases of harm have been reported, however, with symptoms including upset stomach, infections and allergic reactions. Some sources have even indirectly linked death to Kombucha.

Adverse reactions may be due to unsanitary fermentation conditions, leaching compounds from the fermentation vessels, or “sickly” kombucha cultures that cannot acidify the brew. The acidity of the fermented drink is what prevents the growth of unwanted contaminants.

Since home-brewing facilities vary a great deal, the tea can easily become contaminated with harmful germs. Home-brewed tea should not be brewed in ceramic, lead crystal or painted containers, as the acidity of the beverage can cause it to absorb harmful elements from the container.

All in all, there is no solid evidence that Kombucha delivers on its health claims, and given that several cases of harm have been reported, it might be best to avoid it until further research has been done. Since potential health risks are unknown, anyone with an immune deficiency or other medical condition should consult physician before drinking the tea. Women who are pregnant or breast feeding should also avoid Kombucha.