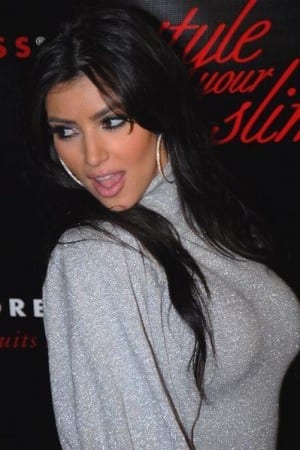 Kim Kardashian had initially laughed off the mysterious flour bomber, but the starlet is now thinking about pressing charges.

31-year-old Kim Kardashian was approached at a red carpet event for her new fragrance last week by a woman yelling something that sounded like “fur hag,” who then threw flour on the star’s back.

“That probably is the craziest, unexpected, weird thing that’s happened to me,” Kim Kardashian told E! News. “Like I said to my makeup artist, I wanted more powder and that’s a whole lot of translucent powder right there,” she said, making light of the situation.

The flour bomber tried to run but Kim Kardashian’s rep held her and security escorted her away. According to a press release from the Los Angeles County Sheriff’s Department, Kim did not press charges at the time, but a non-criminal battery charge was filed anyway.

Now it appears Kim Kardashian is having second thoughts. “Now that I think about it and had some time to digest it, I think, ‘What if that was some other substance? What if that person had a dangerous weapon?’ It’s scary,” she told E! News. “And what’s even scarier is this woman acted as if she was a part of the press. She just came out of nowhere! And so we are definitely changing things up a little bit, amping up security, taking some measures, and … I’m gonna definitely deal with it because it is not acceptable.”

PETA, while denying any affiliation with the flour bomber, has offered their support to the woman in the face of legal action. A spokesperson for PETA told Celebuzz, “We don’t believe Kim would be so shortsighted as to go after this woman, but if she does, we’ll definitely look at how to maximize exposure to the cruel fur industry, and that could mean defending the activist if she wishes.”

PETA said, “If anything, Kim should get a life, the very thing that she denies animals.”