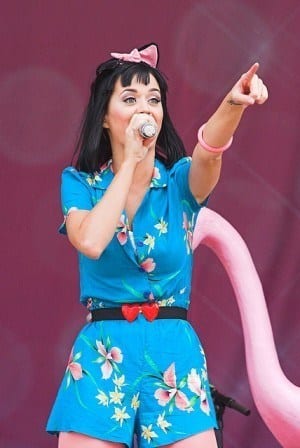 More than 50,000 people have signed a petition to remove Katy Perry’s video from YouTube

From helping deliver a baby to splitting from John Mayer, pop singer Katy Perry has had quite a week. To add to that, her “Dark Horse” video has caused controversy and resulted in an online petition that demands removal of the video from YouTube.

More than 50,000 Muslims have signed the Change.org plea and labeled the video as offensive, particularly a scene in which an Islamic necklace forming the word “Allah,” meaning “God” in Arabic, is burned by lightning fired from Perry’s fingers.

“Such goes to show that blasphemy is clearly conveyed in the video, since Katy Perry (who appears to be representing an opposition of God) engulfs the believer and the word God in flames” Shazad Iqbal of northern England wrote in the petition he started. “Using the name of God in an irrelevant and distasteful manner would be considered inappropriate by any religion.”

Residents of Britain make up the majority of signatures so far. However, countries such as Pakistan, Qatar and Saudi Arabia have also joined the dispute.

Faeezah Shaik of South Africa said in a comment, “Artists should consider the impact their ‘art’ would have on society and not just go ahead and do things for the sake of being controversial.”

While the video has not been deleted, it has since been edited and republished without the “Allah” necklace. A source close to YouTube told Fox News that the site will only intervene and remove a video if it violates the rules and regulations.

Others have rather different opinions of the situation. “The image of the pendant goes by so fast it’s almost impossible to even notice,” said Dan Gainor, vice president of business and culture at the Media Research Center. “YouTube isn’t perfect, but this is ridiculous.”

By now, Perry is most likely used to cultural backlash. Last November, she received disapproval for her Geisha-themed performance of “Unconditionally” at the American Music Awards

Despite such criticism, Perry began her career singing Christian gospel music, coming from a family of traveling Pentecostal ministers. And although she admitted to not identifying with a specific religion, she recently told Marie Claire that she still maintains “a deep connection with God.”