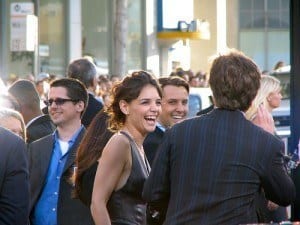 In the meantime, there has been no rush to fight for custody of the couple’s daughter, Suri. But, while Holmes’s main concern is not on a public fight for money, she is more interested in the custody of the former couple’s child.

Katie Holmes has been spotted with daughter Suri eating ice cream, an outing that causes some to assume Suri to be Holmes’s defense against Cruise. According to The Atlantic Wire, sources said that Katie Holmes is keeping Suri away from her father.

And according to E! Online, no one has seen Cruise with his daughter since his separation from Holmes. However, Cruise makes phone calls to Suri every day.

According to The Los Angeles Times, Cruise is concerned about the religious ideology he and Katie Holmes would raise Suri by. A significant determinant in the couple’s separation concerned Cruise’s devotion to Scientology. But Lisa Helfend Meyer, a Los Angeles family law attorney said, “It has to affect a child physically or emotionally. [The religion] cannot just be different.”

On the allegations that Holmes was being followed by Scientology believers, a Scientology attorney said, “There is no truth whatsoever to the [report] that the church of Scientology has sent anyone to follow or surveil [sic] Katie Holmes.”

Katie Holmes hired Jonathon Wolfe, a well-acclaimed lawyer whom specializes in the separations of wealthy couples. Wolfe said the divorce is a “personal and private matter,” adding that, “Katie’s primary concern remains, as it has always been, her daughter’s best interest.”