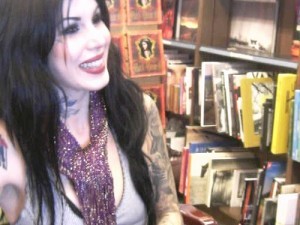 Kat Von D airs out faults in her relationship with Jesse James.

In a note posted to her Facebook on Sunday, Kat Von D gives the public a detailed account of her feelings towards Jesse James and her relationship.

The note starts off with admitting that she discovered the 19th woman James cheated on her with this past year and goes into how she believied in people changing for the better and how she “was confident and excited at proving the world wrong.”

She goes on to say how she knows she, “deserve a big fat  “I told you so,” from everyone, and wish I didn’t have to say, “You all were more right than you’ll ever know” but you were.”

Rumors plagued the media after they said that Kat Von D contributed to the spilt of Jesse James and ex-wife Sandra Bullock.

The former L.A. Ink star goes on to say, “I tried my best to go through all of this without venting, or complaining, or fueling more tabloid mumbo jumbo – but this isn’t about any of that. This is about me making peace with myself, and forgiving myself for making some bad mistakes.”

Von D ends the note with thanking fans for support and with a promise not to dwell on the negative.

James and Von D, who had originally planned a summer wedding, officially broke up in September.