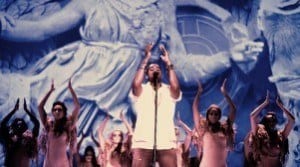 And lo, it came to pass on the 161st day in the year of our Lord 2013 that Kanye West descended from his celestial temple to declare/reaffirm that he is a God.

Kanye West, who must unquestionably be the God of humility, hosted a listening party in New York last night for his upcoming album Yeezus. The album debuts on June 18th and features collaborations from artists such as Chief Keef, Bon Iver’s Justin Vernon, Daft Punk, Kid Cudi and probably Ronald McDonald.

Kanye West showcased 10 tracks from his new album, including Black Skinhead, New Slaves and of course I Am a God, whose title can only imply Mr. West’s exploration of modesty viewed through the lens of a hard working Tokyo go-go dancer.

The messianic human version of a Big Mouth Billy Bass also revealed his new approach to music making. “I got a new strategy — it’s called ‘No Strategy.’ And I got a way to sell more music — it’s called make better music, Kanye West said.” Following this divine revelation the audience began speaking in tongues and weeping chocolate tears of joy.

Kanye West also explained his naming of the album Yeezus, saying “”West was my slave name, Yeezus is my god name.” And to think, this whole time Kanye West has been a slave; a slave worth $100 million dollars, but a slave nevertheless.

Another one of the beatitudes that Lord Kanye West bestowed was this: “Honestly, when I listen to radio, that ain’t where I wanna be no more… At this point, I could give a fuck about selling a million records, as long as I put out an album [that] y’all can rock to all motherfucking summer.” It would seem that Kanye West is also a benevolent god, who like any god worth his incense, just wants our motherfucking summer to be rockable.

Kanye West’s elevation to divinity also has sacrosanct implications for his progeny. Let us not forget that Kanye’s paramour Kim Kardashian, star of E!’s avant-garde underwater cooking show Keeping Up with the Kardashians, is pregnant with his unborn daughter.

The child of Kim Kardashian and Kanye West is due to hit TMZ in a few weeks and will face many challenges from the outside world, including her mother potentially mistaking her for the placenta she intends to eat to retain her youth.

This child will indubitably be a harbinger either of the End Times or of a neo-society based on Versace, rotund butts and teddy bears that must be dug out of rap stars stomachs with a bowie knife.