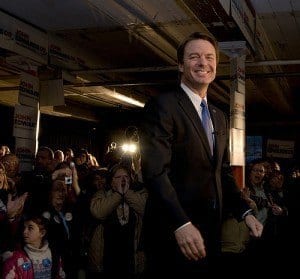 John Edwards, former 2008 Presidential candidate, is set to go on trial today in Greensboro, N.C. John Edwards faces six felony counts including four counts of receiving illegal campaign contributions, one count of false statements from allegedly soliciting and conspiracy. Edwards allegedly spent the campaign donations that he did not report for living and medical expenses for his pregnant mistress, campaign videographer Rielle Hunter, while his late wife was battling breast cancer.

John Edwards wasn’t alone in this ruse on his way to the White House, as his trusted aide, Andrew Young, eventually made a public statement claiming paternity for Edwards’s unborn child, in order to through reporters off track and keep John Edwards poll numbers up. Young was married with three kids and told ABC News 20/20, “The most crazy thing about it is, is that it did work.” According to ABC News, “By the time Edwards suspended his campaign in late January 2008; Young was in hiding in California with his family and Rielle Hunter, who gave birth to a baby girl in Santa Barbara a month later. Edward continued to deny he was the father until finally acknowledging paternity in early 2010.”

Young is serving as a key witness in the case against John Edwards who “is accused of accepting more than $900,000 in campaign funds from two wealthy donors, knowing the exposure of his extramarital affair ‘would destroy his presidential campaign,’” reported CrossRoads Today. John Edwards is pleading ‘not-guilty’ and truly believes he did not break any laws. A legal analyst for ABC News, Dan Abrams, said, “I think John Edwards’ own lawyers are going to have to attack John Edwards. They’re going to have to talk about John Edwards as a flawed man and a flawed human being who made some big mistakes.”

The trial for John Edwards may last until late June and ABC News believes it will be an entertaining one; “Because both Edwards, 58, and Young, 46, have a history of lying about the events leading up to the trial, the stage is set for some dramatic courtroom moments.”