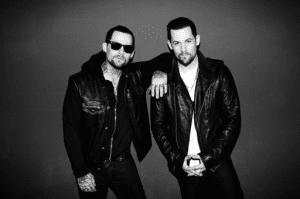 Joel and Benji Madden are back and they’re making it known.

The duo recently released a two part album titled and their first debut studio album as The Madden Brothers titled Greetings from California, the first musical effort from the two since their 2011 mixtape.

The brothers are most known for their previous success as the faces of punk-rock band Good Charlotte, who produced hits such as “Lifestyles of the Rich and Famous,” “I Just Wanna Live,” and “The Anthem,” before taking a break in 2011 which led Joel and Benji to begin working on their side projects.

During the band’s hiatus, Joel spent time with his children alongside Nicole Richie while Benji began dating actress Cameron Diaz.

The two brothers have since returned to the studio to compile their latest album, Greetings from California which is broken into two discs, each with its own respective theme that makes the entire project different but cohesive all in one.

“We made this record for the sake of being creative and its an artistic kind of vision that we had that we felt we needed to go with. We did this because we really need to do this as artists,” said Joel.

Disc one kicks off with remembrants of their Good Charlotte days and carries a more upbeat pop-rock vibe while disc two is an impressive blend of folk and southern rock, an adventurous and creative approach to their new musical endeavor.

The album was first released in Australia where Joel spent time as a coach on both seasons of The Voice.

The Madden Brothers have announced that they will be going on tour in support of their debut studio album and the tour will kick off with a five-dates in Australia beginning on Oct. 31 in Melbourne.

For more information about the album or future tour dates click here.