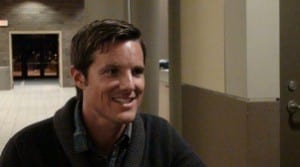 Jason Russell, co-founder of the non-profit Invisible Children and director of the viral “KONY 2012” video, is finally opening up about his public meltdown last March. Known for his films and raising awareness for the two organizations, Russell was also seen having a very public and very naked meltdown in the streets of San Diego last spring. Quiet until now, Jason Russell sat down with Oprah Winfrey for the Oct. 7 episode of Oprah’s Next Chapter to talk about what happened and where he is now.

Last March, Jason Russell, only a few weeks after the “KONY 2012” video went viral and garnered over a hundred million views, was caught on tape running down a street in San Diego naked, pounding the pavement with his hands and yelling at passing cars. Russell was detained, taken to a medical facility and the breakdown was said to be due to exhaustion.

“It’s really hard to explain if people who have never had an out-of-body experience, but it really wasn’t me. That wasn’t me. ” Jason Russell says in an excerpt from the episode about his meltdown. “That person on the street corner ranting and raving and naked is not me, that’s not who I am. … Talking to myself. Ranting. Raving. Talking about good versus evil, God and the devil. I mean it was just very out of control.”

“My ring, you can see, is clean, clean, clean, and then there’s the street corner,” Jason Russell said, showing Oprah the meltdown damage his wedding ring endured. “You can see how hard I was pounding. You can see the dent. That to me, slamming my hands as hard as I can on the ground, like I don’t know who that was. Like I don’t, I can’t—I look at that video and I think, how sad for him.”

The full episode will be aired this Sunday on OWN.