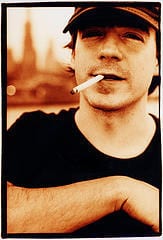 The singer had been in and out of rehab since 2009

Jason Molina, a singer-songwriter best known for his work with his alt-rock bands Songs: Ohia and Magnolia Electric Co., died on March 16 at the age of 39.

Molina, who had been a prominent musician in the underground alt-rock scene for 20 years, reportedly died of alcohol-related organ failure, according to Rolling Stone.

“This is especially hard for us to share. Jason [Molina] is the cornerstone of Secretly Canadian. Without him there would be no us — plain and simple,” his label, Secretly Canadian, said in a statement released over the weekend. “His singular, stirring body of work is the foundation upon which all else has been constructed. After hearing and falling in love with the mysterious voice on his debut single ‘Soul’ in early 1996, we approached him about releasing a single on our newly formed label. For some reason he said yes.”

Jason Molina stopped touring to treat his alcoholism in 2009 and had been suffering from health problems in the public eye since 2011, when his family came out and asked fans to contribute to a fund to pay for Molina’s rehab. He bounced around rehab for two years, all the while not having health insurance.

During his rehab stint, he posted a statement on his website which read, in part: “Treatment is good, getting to deal with a lot of things that even the music didn’t want to. I have not given up because you, my friends, have not given up on me. I do still need your support however that takes shape; good vibes are worth more than you might think.”

Jason Molina recorded 15 studio albums with his two bands (Songs: Ohia and Magnolia Electric Co.) between 1997 and 2009; he released solo work as well, including an album titled “Autumn Bird Songs” in 2012.

Steve Albini, an audio engineer and musician who worked with Molina on several projects, paid his respects in a statement: “I loved hearing Jason Molina sing. He was a genius at turning a phrase and making it into something more than the words in it. Jason was almost supernaturally prolific, and several times I watched him write an album’s worth of songs in a weekend, recording them on the spot. Much of his recorded output with Magnolia Electric Co is the evidence of him and the band playing his songs for the very first time. It’s amazing, really, that it was any good at all, much less so touching and fully realised. Jason was a unique talent and I will miss him. My heart goes out to all his friends and family, all of you I’ve met have been good people who did well by Jason.”