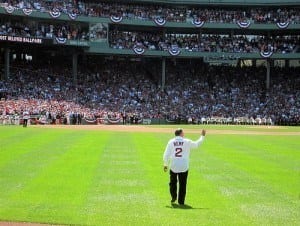 Jared Remy, son of Red Sox broadcaster, charged with the murder of his girlfriend

Jared Remy slipped through the cracks of the justice system, which ultimately cost his girlfriend her life. Jared W. Remy, son of legendary Boston Red Sox broadcaster Jerry Remy, was arrested for beating his 27-year-old girlfriend, Jennifer Martel last Tuesday. After allegedly beating her face against a mirror, Jared Remy was taken to jail, but then was released with no bail.

The next day Remy returned to the house he shared with his girlfriend and their 4-year- old daughter, where the destructive couple proceeded to engage in a heated altercation that turned violent and went all through their house before Jared Remy ended up pinning Jennifer to the patio and repeatedly stabbed her to death.

Jared’s ruthlessness became even more apparent as he committed this crime in clear view of the neighbors, one of whom tried to stop the murder. A resident of the apartment building and a witness to the crime, Ben Ray, tried to stop Jared Remy, but was forced back when Remy turned the knife on him. “It’s not an easy thing to watch; it’s not an easy thing to try and stop,” Ray said. “I did what I could to stop it. And it wasn’t enough.”

The police arrived after multiple calls to 911 were placed with their guns drawn. “A well built male emerged from the porch area with his hands up in the air and covered in blood,” police said. “The male was not wearing a shirt and his socks were saturated with blood…I recognized the male that emerged as Jared Remy, as he was recently arrested for assault and battery with a dangerous weapon.”

Unlike a lot of crimes where the criminal seems to have no past patterns of being a monster, this is not the case with Remy. Jared Remy has had 15 criminal cases spanning from 1998 to 2011, with one of those cases being a domestic violence case that occurred on a previous girlfriend in 2005. According to reports, on November 7 in 2005 Jared Remy had grabbed the girlfriend by the hair, threw her to the ground, and hit and kicked her in the stomach. Remy had been held in the Middlesex Jail for at least 81 days before the sentence was null and void and he was placed on probation.

Patty Martel, Jennifer Martel’s mother believes that if prosecutor put him away during the mirror incident, her daughter would still be alive. “They failed. She would be alive today if they had put him away,” she said.

A friend of Jennifer Martel and a neighbor says she noticed many signs of this impending tragedy. “He would rage off on the smallest thing.” Hill said. “She wanted to leave and was trying to do what was best for the daughter.”

On Friday, prosecutors announced Jared Remy was charged with murder. Jared’s famous father, Jerry Remy announced his grief for Jennifer Martel via his Twitter account after the judgment. “Words cannot describe my wife and my’s grief. Son or not, I am at a loss for words articulating my disgust and remorse over this senseless and tragic act.”

Jennifer Martel and Jared Remy’s 4-year-old daughter who was present during the attack, is now safe and in the custody of welfare officials.