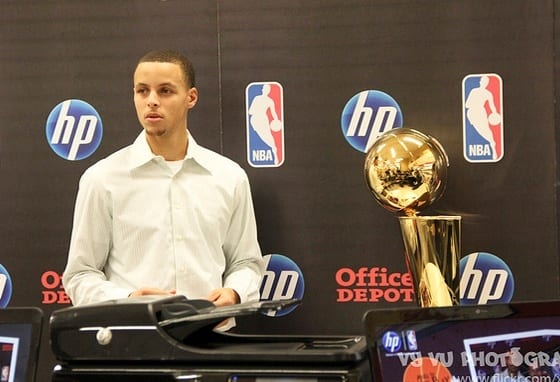 Here are few players that can make their own cases

So the question of the day is Stephen Curry the best player in the NBA? Now before I jump on this growing trend about the greatness of Stephen Curry I want to discuss why he is even mentioned in that category. After a few decent seasons to start his career he has grown to become one of the most dynamic players/ athletes in all of sports. His ability to shoot the ball with precision and quickness is unmatched by anyone I have ever personally seen (including myself). I grew up watching Reggie Miller and Ray Allen but Curry is honestly a different animal and cut from one of the most unique cloths ever seen. Son to an NBA ball player Dale Curry who was a great shooter in his own right, Steph has become a fan favorite and MVP seemingly out of nowhere. It is tough to not watch him in awe sometimes. Now that being said, to say he is the best player in the NBA after one great season is very hard when you have players like LeBron James, Kevin Durant, Russell Westbrook and even Demarcus Cousins who due to his reputation gets over looked a lot but I will talk about him on a later post.

When we talk best player in the NBA it is impossible to not talk about LeBron James. He is in my opinion the best in the league right now. His ability to raise the game of his teammates is unmatched by any player past and present. He may not be able to close out championship runs like MJ but his overall effect on the game provides his teammates with opportunities to shine in their own way. LeBron dominates the game without dominating the ball like most superstars and he could really win MVP every year when you look at numbers and games won.

You should also read: NBA Season has officially begun, so who are the Title Contenders?

Kevin Durant returns from a foot injury he suffered early last season. The former MVP has a lot to prove because in his absence Stephen Curry has become the talk of the town. Kevin Durant who is the best shooting big man in the history of the sport, can put the ball in the rim with the best of them. When healthy he is routinely a 30 point scorer and will put his team on his back late in games. I believe this year after sitting out so long he will put together one of the best campaigns of his career. Now that Russell Westbrook has emerged it will take the pressure off of KD and make his accurate shooting ability mean so much more to the growth of the team. I do believe he will reclaim his dominance and really show the world why he is the best in the NBA.

Now this last guy is new to the conversation but deserves every bit of the attention. Russell Westbrook has taken years of heat for “not passing” the ball as much as people think he should have. I have been in his defense since the beginning trying to explain to people that if he passed more they would have lost more. He is the hardest player to guard in the NBA. After developing his mid-range game he has now become even harder to guard. Explosive, under control and now that he limits his turnovers and averages 7 assist a game, it is almost impossible for most guards to handle him. He is basically a walking triple double. Adding KD back to the Thunder lineup this year will put him in a new stratosphere. Mark my words if he can stay healthy Russell Westbrook will win MVP this season by a land slide. He is too good to be over looked and his energy level is rivaled by none.

Now there are other players that can be added to the elite level but these are the few that compare to Curry. Greatness is measured by consistency and the ability to win games. All three of these guys do both. They also make their teammates better which is true for Stephen Curry. Curry on the other hand is on a mission to prove last years’ legendary season was no fluke. Do you think Stephen Curry is the best player in NBA right now or are people jumping the gun? Let me know in the comments below.