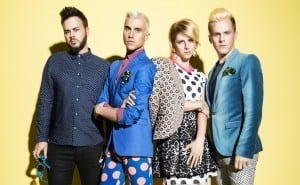 Formed in Provo, Utah, Neon Trees captured the attention of Ronnie Vannucci Jr., drummer for The Killers, leading them to be The Killers’ opener for their North American tour in 2008. This was just the start of Neon Trees’ road to success. Not long after touring the band was signed to Mercury Records and, in 2010, released their first album “Habits”. Their first single “Animals” took off as it climbed to No. 13 on the Billboard Hot 100 and No. 1 on the Alternative Rock chart. Their name soon spread. They’ve been seen on shows such as Live! With Regis & Kelly, The Tonight Show with Jay Leno, David Letterman, and Late Night with Jimmy Fallon. In the last four years Neon Trees has released an EP along with two other albums. The American rock band is currently touring their latest album titled Pop Psychology. We were fortunate enough to talk with lead singer, Tyler Glenn, about the climb into fame, life on stage, and his very recent coming-out story and how it all ties in with his faith in the Mormon community.

Your fashion sense is impeccable! Who would you say your style icon is?

Oh man, I used to draw a lot from glam rock and punk. Lately it’s been David Bowie’s 80’s era where he wore those really nice tailored shoes. They were really colorful and I loved that kind of look. A lot of it has been my own eye though. I’ve been into clothing since I was twelve.

What was it like transitioning to stardom? Overwhelming, exciting, chaotic?

I think it’s been a nice, steady climb the last five years. It’s nice how busy we’ve been. It’s not this chaotic scheme where we can’t leave the house or anything. But it’s getting to be more overwhelming; I’m trying to sort out who I am on stage and off. I think the biggest transition was being thrust into big audiences and learning how to develop that persona.

Speaking of big audiences, do you guys prefer a large audience/venue over the smaller ones now?

I don’t think we have a huge preference. I think we just really enjoy when it’s a full room, whether it’s small or big. It’s that feeling of being jammed into a room and everybody enjoying the music.

Which artist would you want to collaborate with in the future?

Well, if he was still alive, I think Freddie Mercury would have been great. It would be interesting to see what he’d still be doing with music. But I think Cindy Lauper is a real icon, and I think people forget is still so fantastic. I like digging through the older generation of artists and meshing with something new. I’ve always thought she was really great.

Neon Trees music videos are always bold with color and nostalgic to past time periods such as the 50’s and the 80’s. How do you get ideas for music videos?

Lately I’ve been really into John Lautner’s movies. I’m really inspired by the “larger than life” sort of “Roger Rabbit”, “Cry Baby”, and “Hairspray” kind of thing where it’s really cartoon-y but it’s live action and really colorful and big. I like that kind of stuff.

They often have a cinematic quality to them. Ever thought of getting into the film or television industry?

Yeah, I have a lot of ideas. I don’t know if I’d be an actor or what though. I did three of the music videos  myself for this album. It was really fun to edit together. I think I have an eye for movement and edit. But, right now I’m a singer and I think I’ll stick to this for awhile.

What was your reaction the first time you heard a song of yours playing on the radio?

I still react the same today. It kind of helps you stop and see … okay, we’re a part of something that people think is important or relevant, and that’s always nice. It’s easy to feel really small in this industry and under appreciated because there’s so much music and you’re not always the one being talked about. But it’s really great to play shows and have people sing along. It’s great to just hear your song in a store, on the radio, or in a restaurant. It’s a reminder that you’re making something that’s sort of poking through and that people are enjoying.

When you came out to Rolling Stone in April, were you nervous or did you feel comfortable? Do you think you would’ve felt more nervous 20 years ago when homosexuality was less accepted?

I wasn’t nervous because I had come out to people who were really important in my life. That’s not to say fans aren’t important to me, but I had come out to the people I interact with every day. That was the more nerve-racking thing, just wanting to know that they had still loved me for who I was. As much as you get told people will still love you when you come out to someone, it doesn’t make it any easier. It’s still something you have to reveal about yourself. Unless you’ve ever had to do that or hide something about yourself and then tell them, you don’t really get it until you do. It’s such a silly thing to hide and you realize that once you do come out. People don’t care and they don’t think about it. A weight was lifted before the article came out. It was more interesting to see how it was accepted and how many people ended up talking about it and caring, which is really interesting because I didn’t think it would be that big of a deal. I’m glad that it’s being used for good, and I’m glad that anyone who read it received some hope and light.

What was it like being in a long-term and serious relationship with a woman?

I mean, I had dated girls my entire life and I was in love with my girlfriend from high school because that’s what I knew. I hadn’t really explored my feelings, as far as being gay, until my 20’s. It wasn’t really a reality I was dealing with, so when I was dating my girlfriend in my 20’s I got really good at compartmentalizing. It was just this thing that I kept in the back of my mind. But I realized it’s not a way to live, to compartmentalize, and it’s not a way to go about your life. Once we started touring I didn’t date anyone. It’s actually been about five years since I’ve been in a (dating) relationship. Yeah, it’s hard. The biggest thing for me was that there wasn’t any closure after we broke up, that is, until I came out recently. She wrote me this really beautiful email and we reconnected. Everything seemed cool and it was great. I enjoyed that I could actually get some closure and I think she did, too. She was an important part of my life, but it was something that I was dealing with on my own and that I needed to finally let off my chest.

Any advice for people, especially teenagers, who are contemplating coming out?

See, I have no idea what it’s like to go to high school these days because I hear it’s a lot more accepted every where. For me, my high school experience was scary because being gay was definitely not okay and you were reminded of that on a daily basis, so it was something you were kind of forced to hide. But I really think it’s getting more to the point where it doesn’t matter. I just encourage people to live the truth, but be safe and know your situation. I don’t want to carelessly say “be bold and come out” and then have an uncomfortable situation, but it’s no way to live – to hide. I guess that’s my two cents on the whole thing.

Did being from a Mormon community have any sort of impact on you deciding to come out?

I think when I came out it was definitely the idea of wanting to … the whole thing was about self-acceptance. I wasn’t only accepting, yeah, this is my sexuality, this is what my attraction is naturally. It was also accepting this is how I dress, this is how I dance, this is how I do my hair, this is the faith that I believe in, this is the political views that I have. It was accepting the whole package. I still believe in God and I still believe in a lot of the teachings of the church that I went to all my life. It’s hard because there are things that butt heads within my religion and also the way I’ve chosen to lead my life. So instead of throwing it all out, I’ve decided to figure it out and see what I can do. I think that’s the more powerful message – be honest and say this is who I am, this is what I’m doing right now in my life.

What can fans expect from Neon Trees over the next three years or so?

Well, we’re touring our new record right now. We just started a couple days ago and it’s been really fun to just bring it to the road and bring it to the crowd. We’re doing that throughout the summer. I feel like we’ll probably be touring the record for at least another year, that way everybody who wants to see it has a chance. And then possibly another record. Right now it’s “Pop Psychology”.

What are some of your biggest pet peeves?

I hate dishonesty. I know that’s probably an obvious one. I also don’t like air conditioning. I think it creates everything so sterile. I guess as a vocalist I like things to be pretty warm. I don’t like messes. I like things kind of orderly. Sometimes it’s difficult to be on tour because you share a space with a bunch of other people. Those are the ones that come to mind.