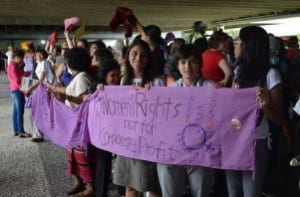 Feminist and non-feminist bond in light of women’s history.

Today is International Women’s Day, a day when feminist and anti-feminist make peace in the celebration of the advancement and current progress of women in politics, education and employment.

The first International Women’s Day (previously International Working Women’s Day) was celebrated on February 28, 1909, brought about by the achievement of women’s activist and their hope to improve poor labor conditions among seamstress and other garment and factory workers.

Many of the women who were treated unfairly, discriminated against, and/or abused during that time were immigrants. International Women’s Day is celebrated worldwide and is notably popular in Denmark, Austria, Switzerland, and Germany.

International Women’s Day is a day to remember how far women have come and how far women still have to go. Women can vote, but the number of women voted into politics is still grim. Women can work, but the number of employers willing to provide maternity leave or insurance that covers birth control and other female-only related issues are also grim, even though women are likely to pay more for insurance because they are women.

Women still make about 80 cents to their male co-workers dollar and many rallies and demonstrations are still being held worldwide to end sex trafficking, end domestic abuse and fight for reproductive rights.

International Women’s Day is a great day to engage in conversation with feminist and learn the history of The Women’s Movement or read Betty Friedan’s “The Feminine Mystique” and Bell Hooks’ “Ain’t I A Woman”. It’s a day of celebration and conversation about what must be done to further the progress of even the women who are comfortable with the current inequality and second-class citizen positions.

International Women’s Day is a great day for male feminist and other men to talk to one another (and the women in their lives) about the benefit of women’s progression and/or express their concerns about equality and how they feel it might hurt them.

International Women’s Day comes once a year but many organizations are celebrating and discussing women’s issues year round. The United Nations Commission on the Status of Women (#CSW57) is in its 57th year and recently took on issues of violence against women and girls at its New York headquarters.