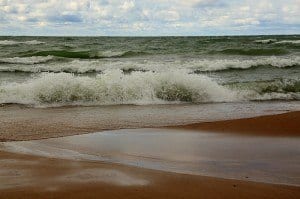 Hurricane Sandy, also known as Frankenstorm, is creating large waves on Lake Michigan due to very high winds. The city of Chicago is urging residents to stay away from the lake during this time. However, some curious residents were recently spotted taking pictures of the dramatic lakeside scene. Winds are expected to reach up to 60 mph Tuesday.

Parts of the lakeshore bike path are closed down due to Hurricane Sandy. The path between North Avenue Beach and Ohio have been closed, including outdoor attractions and the Ferris wheel at Navy Pier. The Chicago Transit Authority (CTA) is also preparing for Hurricane Sandy by rerouting buses that use Lake Shore Drive, if necessary.

According to the National Weather Service, the waves have hit as high as 20.3 feet at the service’s south Lake Michigan buoy. The largest waves, however, are predicted north of Sheboygan. Chris Abele, Milwaukee County Executive, says, “The storm won’t nearly have the same impact as on the East Coast—but people can expect to feel the effects.”

According to ABC Chicago, a flood warning is in effect for Lake Michigan in Chicago through 4 p.m. Wednesday. There have also been reports of flight cancellations at both O’Hare and Midway airports in Chicago.