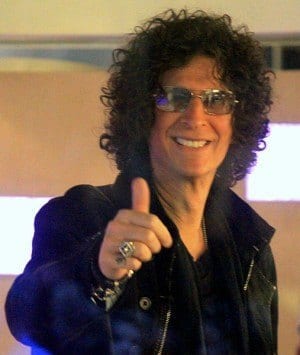 Controversial radio host Howard Stern got into a verbal argument with co-judge Howie Mandel on Tuesday’s airing of America’s Got Talent. Howard Stern also made a comment that set off the governor of Guam.

Stern was frustrated with Mandel’s excessive compassion in judging a contestant. Howard Stern disagreed with Mandel’s opinion of Big Barry, who, in his opinion, performed a lackluster cover of Nina Simon’s Feeling Good.

After the performance, the comment Mandel made that set off Howard Stern was: “I think you’re an incredible novelty act that people would come and see and pay for.”

Howard Stern began the argument by attacking Mandel’s integrity on the show. Howard Stern said, “I gotta tell you, Big Barry, this isn’t about you. This is about Howie and how he treats the show.”

Stern then demanded an apology from Mandel on behalf of the contestants that did not make it through to the quarterfinals of America’s Got Talent.

According to WebProNews, Mandel only allegedly let Big Barry through to this round to annoy Sharon Osbourne and Howard Stern. Neither wanted Big Barry to pass through. To prevent the argument from persisting, Osbourne quickly pushed Mandel’s buzzer.

The controversial radio host made a remark on an episode of America’s Got Talent, that Guam did not receive well. Unimpressed by the performance of Lion Dance Me, a dance group from Guam, Stern said, “If this was in Guam, you would have won already. Guam — they don’t have many exciting acts. But here in America they want different, they want new, they want unique.”

Gov. Eddie Calvo responded, “Howard Stern? Who? Sorry, I’m a fan of Chelsea Handler. I wouldn’t be too concerned about what he says, especially when our performers are kicking butt in all these national competitions. I mean, I can’t even remember how many trophies SKIP has brought home from national and international competitions. Look at Marko Germar. Look at Admiral (Peter) Gumataotao. Look at our high school ROTC teams and our little leaguers. I think our people are doing pretty well on the world stage. I’ll let their excellence in competition speak for itself.”