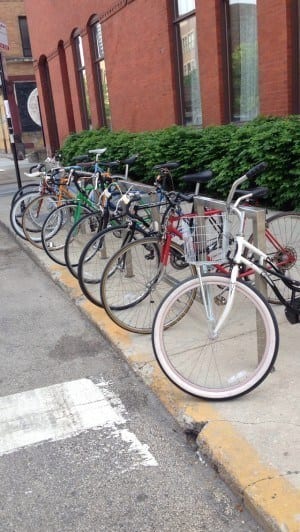 There is no shortage of adjectives to illustrate what it is like to be a cyclist in the quintessential American city. Resourceful, economical and sustainable are a few. Treacherous, hazardous and bold are a few more. In tourist guide literature, Chicago boasts 200 miles of bike lanes throughout the city, including 18.5 miles of lakefront trail. Off the trail, cyclists share the road with motorists because riding on the sidewalk is punishable by fine. Shortly after being elected Mayor, Rahm Emanuel released a transition report in which he laid out the ambitious goal of creating 100 miles of protected bike lanes by May of 2015. Protected, then defined as, ‘physically separated from traffic by bollards or parked cars’. However, after plans to add protected bike lanes were delayed by Illinois Department of Transportation bureaucracy- requiring at least three years of safety data on the dozen or so miles of protected bike lanes that already exist, IDOT then changed the definition of protected bike lanes in the original proposal to include ‘buffered’ bike lanes, now inconsistently referred to as ‘buffer protected’ lanes by transportation officials. This means that Chicago cyclist who must ride north or southwest are separated from traffic by only a painted line on the road for a vast majority of their commute. As a longtime bike commuter and previous bike messenger, I understand firsthand the perils associated with biking. However, if you follow these tips you can diminish the dangers associated with a bike commute.

·       Obviously, a keen sense of direction and awareness are key to surviving out on the road. In addition to the Google maps bicycle feature, there are a handful of user friendly bicycle routing apps like MapMyRide, that allow users to create, edit and track routes in real time. Having prior knowledge of detours, traffic trends, construction sites, turnabouts, etc. is a great way to save time and remain confident whilst navigating this urban jungle.

·       After researching routes, find a bicycle tailored to accommodate your usage and measurements. Proper geometry is the key to longevity and does much to prevent long-term personal injury, namely, back pain! Mention this to your local expert when trying to select your ideal bike. Taking the time to learn basic repair skills, a quality set of tools; a lock will keep your annual maintenance costs under budget. Also, consider registering your bike with your local Police, should you ever have your bike stolen.

·       Before hitting the road a few accessories to consider are; a helmet that fits around your skull without slipping, pinching, or affecting your breathing, head and tail lights for low visibility conditions, mirror attachments to aid in comfortably navigating traffic.

·       Aggressively follow the rules of the road. Do not oblige when motorists stop the flow of traffic to let you illegally cross an intersection. When riding alongside parked cars, stay closer to moving traffic so as to avoid having a door flung open in your path by a clueless person. Although from experience I know that occasionally moving cars will also swing open a passenger side door much to your detriment.

Following these tips will no doubt aid in protecting oneself, but the thought of Chicago being a ‘bike friendly’ city is mere propaganda. My thoughts are with the young man I witnessed lying motionless, at the front bumper of a silver Mercedes-Benz SUV, his bicycle 5 feet away on the curb, as a crowd gathered to watch his stiff body be hoisted into an ambulance by firefighters.