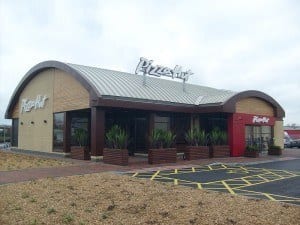 So why is it available in the UK first?

Hot dog stuffed crust. It sounds like one of those “only in America” things, but for once it’s the United Kingdom that’s getting attention for a new less-than-healthy menu item.

Pizza hut, who brought us the cheese stuffed crust pizza, is introducing hot dog stuffed crust in the UK. For an added bonus they throw in a free mustard drizzle. Pizza Hut must be trying to teach the UK the Chicago rules of hot dog eating (absolutely no ketchup, ever, don’t even ask), although the Second City doesn’t typically stuff hot dogs into their deep dish.

The hot dog stuffed crust sounds about as American as it gets, but not only has Pizza Hut bypassed the Junk Food Republic by introducing this pizza abroad, they have quietly been serving it up in Japan and Thailand for years.

With the hot dog stuffed crust making its way westward, it’s only a matter of time before it hits the menu boards in Small Town, U.S.A. In fact, now that it has been introduced to Western culture Americans will likely begin to demand a taste of this new strange food mash-up. After all, if there are two things Americans love, they are mash-ups and hot dogs.

How long do you think it will take for the hot dog stuffed crust pizza to make it across the pond?