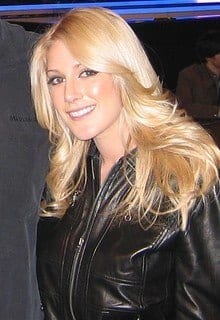 Heidi Montag has come clean about her regrets in the past. Now the TV personality has confessed her “biggest” regret – liposuction.

Heidi Montag, 25, is blaming the appearance of cellulite on her thighs on the weight-loss procedure.

“I can’t believe I did this to myself,” Heidi Montag commented, adding, “I’m so insecure about my legs . . . I rarely wear shorts.”

According to physicians, most women over the age of 25 battle with the appearance of cellulite on their thighs, and one plastic surgeon isn’t surprised to hear Heidi Montag complain about cellulite.

From In Touch, “Though she had perfectly smooth legs prior to the surgeries, Heidi was horrified when photos surfaced depicting what appeared to be cellulite on her thighs just a few months after the body-contouring procedure.”

Heidi Montag added a bit of advice for those looking to maintain their figure without resorting to surgery. “Try to lose weight and eat healthily,” she added.

Heidi Montag appeared on the cover of People magazine in January 2010 and denied she had an addiction to plastic surgery after undergoing a marathon ten procedures in a day during November 2009. At that point in time, Heidi Montag had already undergone a nose job and breast augmentation surgery.

Physicians caution liposuction is not the right procedure for everybody looking to shape their body in a certain way. Dr. John Di Saia of San Clemente and Orange voiced his reaction to the criticism of the procedure offered by Heidi Montag:

“Heidi has lost her luster to the entertainment community. I’d wager she would say anything to make the powers that be happy, and bagging on your plastic surgery is popular now.

“With that being said, lipo is not a solution for all. As we have seen in other entertainers (e.g. Tara Reid) lipo can leave patients with irregularities seen in the treated skin. This is not a common occurrence but happens much more prominently in cases, in which it is performed inappropriately.

“There has to be enough fat to treat, and the skin over it has to have the appropriate tone or elasticity. These are issues judged properly by trained personnel. Philosophy also has a good deal to do with which patients are offered surgery in a particular practice.

“Heidi was quite thin before surgery and is likely to have had surgery in areas that were not good targets . . . too little fat to treat. I’d bet that is the source of her troubles if they exist to any significant extent, anyway.”