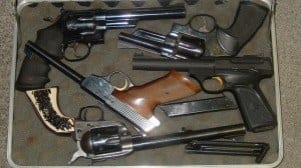 Only a day after the US Senate refused to pass legislation that would have seriously curtailed a crazy person’s ability to obtain firearms, Reuters is reporting that shots were reported on the campus of MIT.

The report goes like this: “The shots ‘were reported near Building 32… which is currently surrounded by responding agencies,’ according to a statement on the MIT website for emergency information.”

All this comes just days after the Boston bombing, as people around the city and nation are on high alert after two explosions at the Boston Marathon that killed three and injured more than 170.

Reuters also reports that the university’s Twitter page warned students of an “active shooter incident and told them to “stay indoors and away from the area.”  CNN and WCVB-TV have reported that an officer was shot and a representative for the university’s police department could not be reached for comment by Reuters.

It might be a bit too early to point fingers and make broad conclusions about the culprit for such a crime, but I will anyways.  Anyone ready to march on Washington with me for some gun control up in this bitch? Damn.