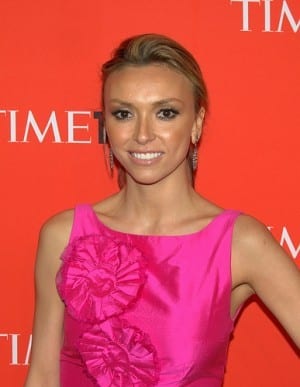 Giuliana Rancic and husband, Bill, recently welcomed a baby boy last month via surrogate. The first pictures of Edward Duke Rancic are being shared with the world. The new mom couldn’t be more excited to start her new life as a mother.

Giuliana recently shared some of her photos with E! and excitedly talked about her new baby boy: “He’s just the best baby in the world, but I’m sure all mothers say that. He’s beyond adorable, though. I’m completely enamored.”

The E! News host also divulged some details about her new morning routine. She revealed, “At like seven in the morning, we bring him into our bed, and we’ll just be with him for three hours at a time. It’s just great, because he kind of dozes off. We look at each other, and he’s just precious. It’s a nice bonding time.”

Giuliana was also asked about whether or not they would expand on their family. She responded saying, “You know, not yet. One at a time. But I’ve always wanted a big family.”

Unfortunately, this was not the only big news Giuliana received this year. The star was diagnosed with breast cancer and underwent a double lumpectomy as well as a double mastectomy. Reflecting on this past year, Giuliana stated “This was the best year of my life because of the baby and it was the worst year of my life because of the breast cancer.” She went on to say “But it just goes to show that if you’re strong and you’re positive, great things can come out of the darkest time in your life.”

Both Giuliana and Bill credit their son in saving Giuliana’s life. Had she not gone through with the mandatory mammogram that accompanied the fertility treatments she had been receiving, doctors may not have detected the cancer so soon. Giuliana spoke out on the importance of early detection:

“We’re encouraging women to give themselves a breast self exam and really think about early detection. Early detection is everything. It’s what saved my life. If you detect breast cancer early, you have a 98 percent five-year survival rate.”