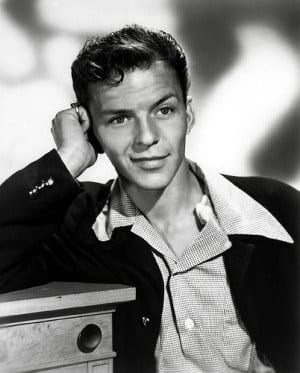 No DNA test, a rendition of “Come Fly With Me” may be the only way to tell if Ronan Farrow is the late-crooner’s son.

For all the old souls out there who wish they could have been born in another decade like the 50s or the 60s, there may be part of a legend in our midst.

If Clint Eastwood’s son doesn’t tickle your fancy (are you okay?) or you simply desire the spawn of a singer, Mia Farrow may have your solution. In an interview in the November issue of Vanity Fair, when asked if Frank Sinatra could be the father of son Ronan Farrow, Mia Farrow cryptically responded “possibly”.

Could Ol’ Blue Eyes himself actually be the father of 25-year-old Ronan Farrow? Mia Farrow and Frank Sinatra were only married from 1966-1968 however; Farrow maintains they continued their relationship afterward despite her longtime relationship with Woody Allen. Farrow attests that Sinatra was the love of her life and adds, “We never really split up”. The legendary member of the rat pack would have been 72 years old when Ronan was conceived. Ronan Farrow, who is now a human rights attorney, is “officially” Mia Farrow’s only biological child with Woody Allen.

This paternity bombshell by actress and human rights activist, Mia Farrow, brings her family into focus as she gives the term “modern family” a new light. Mia Farrow has 15 children, some adopted, some biological. Farrow’s estranged child, formerly known as Soon-Yi Previn, is married to her mother’s ex Woody Allen. On Father’s Day in 2012 sarcastic Ronan tweeted “Happy father’s day—or as they call it in my family, happy brother-in-law’s day.” Forget the Kardashians, we need a Keeping Up With the Farrows.

It is unsure if we will ever know who the real father of Ronan Farrow is. As of now, a DNA test has not been conducted. If you ask Ronan Farrow his opinion… “We are all possibly Frank Sinatra’s son” (via Twitter).