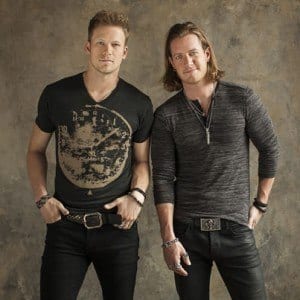 Tyler Hubbard and Brian Kelley have unveiled the tracklist for their highly anticipated sophomore album.

Ever since the release of their debut single, “Cruise,”  Florida Georgia Line’s career has been blazing, breaking records along the way.

The duo, made up of Tyler Hubbard and Brian Kelley have had much success with their debut album, Here’s To The Good Times which garnered five singles and was certified 2x platinum by the RIAA earlier this year.

Their hit single, “Cruise” broke a Billboard Hot Country Songs record for the longest-running No. 1 song by exceeding 21-weeks in the No. 1 spot. Additionally, the duo recently broke a record for most radio adds with 127 Mediabase radio adds, topping a previous record set by Taylor Swift.

Their momentum continues as they’re currently out on the road with Jason Aldean for the Burnin’ It Down tour along with country newcomer, Tyler Farr. Hubbard and Kelley are also gearing up for their second studio album, Anything Goes which is set to release Oct. 14.

The duo recently announced the tracklist for the album which is set to include their current single, “Dirt” as well as “Sundaze,” “Sippin’ On Fire” and more.

The album announcement came during their recent Good Morning America appearance where the two noted their smash hit “Cruise,” inspired lyrics for their sophomore studio album.

“This whole album is kind of like how album one was for us… kind of where we are at this point in our lives, who we’ve become,” said Tyler Hubbard. “To be honest, we’ve learned a lot from our fans and a lot from playing every single night for the last three years. So, we’re excited. We tried to step up our game, and we’re ready for you guys to hear it.”