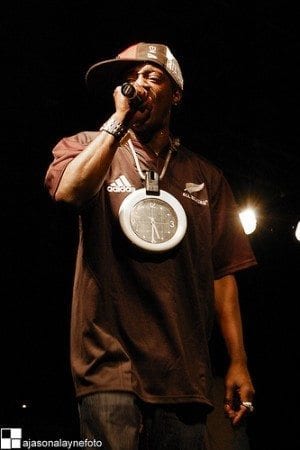 Flavor Flav and his clocks may be serving time after being arrested for assault with a deadly weapon and domestic violence. The rapper, hip-hop artist and reality TV star was apparently fighting with his fiancé when she called the police to report the fight. He was arrested outside of their Las Vegas home Wednesday at 3:30 a.m.

Flavor Flav and his girlfriend, Elizabeth Trujillo, 39, of eight years were reportedly fighting about infidelity when he pushed Trujillo to the floor twice and chased her 17-year-old son with two knives in his hands, threatening to kill him. The rapper, a member of the group Public Enemy, cut his finger with one of the knives before police arrived. Trujillo had reported that Flavor Flav ripped her earring out, but her son was not injured.

The rapper has a history of arrests and convictions for traffic infractions, assaulting his then-girlfriend and shooting a neighbor. He served time for the latter two offenses.

Flavor Flav, 53, whose legal name is William Drayton Jr., was held on $23,000 bail and had an initial court appearance to face the charges. He will be looking at up to six years in prison if convicted.