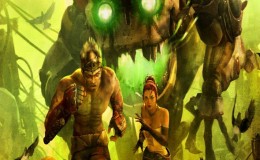 An action-packed, cinematic platformer that will keep you gripped from start to finish

Hot of the success of their 2007 PlayStation 3 exclusive “Heavenly Sword”, Ninja Theory has successfully made the transition to multiple platforms with their post-apocalyptic interpretation of the famous Chinese legend “Journey to the West”. A creative hybrid of the intense platforming of “Prince of Persia”, action-packed combat of “God of War” and bathed in a vibrant pallet of radiant colors, “Enslaved: Odyssey to the West” makes a strong claim to be on your shortlist of games to purchase this holiday season.

With Alex Garland (author of The Beach and the screenplay “28 Days Later”) penning the script for “Enslaved”, it stands to reason that the game’s story is quite good. Unsurprisingly, it is. Following the unlikely and reluctant partnership between beast-man Monkey and the tech-savvy Trip, “Enslaved” does an amazing job of not only creating a paradoxical, post-apocalyptic setting where robots roam a world progressively being reclaimed by the beauteous forces of nature, but also developing two of the more personable and sympathetic characters in recent memory. The plot is compelling, the writing is sharp and the voice acting is incredible — the three tent poles upon which any memorable video game story is built with.

Gameplay in “Enslaved” is most reminiscent of the sort of linear marathon of perilous platforming and combat that gamers have seen in the more recent Prince of Persia titles. As Monkey, you’re normally tasked with venturing from point A to point B, scaling walls, leaping over bottomless chasms and fighting off an army of rampaging robots. His cohort, Trip, doesn’t actually engage in combat, but she does assist Monkey with her technological prowess. Robots can be disabled or stunned with EMP blasts, weak points can be exposed, and she also can use her dragonfly camera to scout out the road ahead. Fortunately, aside from special moments in the game, you don’t actually have to baby-sit Trip and are free to be as reckless or strategic in combat as you desire.

“Enslaved’s” gameplay isn’t overly complex. You don’t have to memorize lengthy chains of combos to be proficient in fighting (though you can learn newer and more powerful attacks) and normal battles seldom pose much of a challenge. The puzzles never take more than a few moments to figure out, and the platforming, as exhilarating as it may be to swing across the environment with the ground hundreds of feet beneath your feet, lacks both the difficulty and sensation of danger that “Prince of Persia: The Sands of Time” accomplished so well in 2003. The entire experience, however, is imbued with a cinematic touch that makes it difficult to sometimes tell whether you’d enjoy playing “Enslaved” more or merely sitting back and watching it in action.

That’s not to discredit the gameplay entirely, though. Most of the boss encounters are creatively designed, forcing you to combine both brain and brawn in order to emerge victorious, and even the gameplay is enjoyable, just lacking in complexity. As odd as it may sound, the gameplay even occasionally feels like an excuse for the gamer to enjoy its finely crafted narrative instead of the other way around.

Lastly, it’s important to acknowledge “Enslaved’s” visual accomplishments. The art direction and level design is exceptionally unique, and the animations are eerily realistic, particularly when it comes to characters’ facial expressions. Actor Andy Serkis assisted with the motion-capture for “Enslaved”, and the time and effort Ninja Theory put into making “Enslaved” look great truly shows.

“Enslaved: Odyssey to the West” isn’t necessarily the most fun game in the world to actually play. As interesting as the boss fights are, the platforming, puzzles and combat simply lack the sophistication that gamers have come to expect after the likes of “Prince of Persia” and “Uncharted”. However, it does offer a cinematic gaming experience that has an uncanny ability to keep you hooked from start to finish. The set pieces are explosive, the cut scenes are dramatic, and the excellent writing and plot will keep you hooked and begging for more, even though the gameplay might slightly be lacking.

With a completion time of only 8-10 hours, it’s a little difficult to recommend buying “Enslaved: Odyssey to the West”, regardless of how good its story is. That said, it’s still one of the more original games that have been released in 2010 so far, and it’s definitely worth checking out.