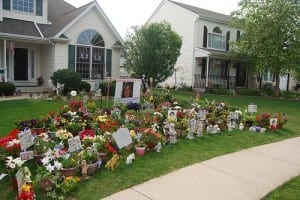 Drew Peterson, former Bolingbrook police sergeant, was slammed in the closing statements of the prosecution.

Illinois prosecutors said, “Drew Peterson was the only person who had the motive and means to kill his wife, Kathleen Savio, and make it look like an accident in 2004.”

Chris Koch, prosecutor, began his closing statement by telling the Joliet, IL jury that when they walked into this courthouse, “you did not leave your common sense at the front door. It is clear this man, Drew Peterson, murdered Kathleen Savio.”

Prosecutors continue to push the point of common sense by reminding the jury that “a witness called by the defense admitted that the chance of a healthy adult drowning in a bathtub was one in a million.”

This was the first of the closing statements of the five-week murder trial. Peterson is accused of first-degree murder in Savio’s death.

Savio was found dead in the bathtub in her suburban Chicago home in 2004. Her death was initially ruled an accident, but was later ruled a homicide following the 2007 disappearance of Peterson’s fourth wife, Stacy Peterson.

Although Drew Peterson still remains a suspect in the Stacy Peterson case, he has not yet been charged in her disappearance.

Defense attorney Joe Lopez is expected to focus on the lack of evidence in the case and provide reasonable doubt that Savio’s death was even a homicide.

This morning, the prosecution finished its closing statements but will have a chance for retaliation after the defense’s closing argument.

Drew Peterson has pleaded not guilty to first-degree murder. If convicted, he faces up to 60 years in prison.