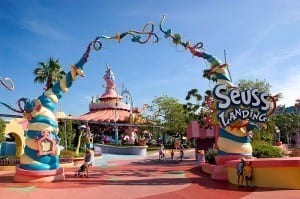 Dr. Seuss was known for using made-up words and tongue-twisting rhymes to tell his stories, but he used those stories to teach some very real lessons.

The movie “The Lorax”, which is based on a popular Dr. Seuss book, releases in theaters tomorrow to coincide with Dr. Seuss’s 108th birthday.

The Lorax is another example of a big idea translated into lessons children can understand.

The film elaborates on the story. Taylor Swift is the voice of Audrey, a girl who desperately wants to have a real tree instead of the fake ones that line the streets of Thneedville. Zac Efron lends his voice to Ted, who has a crush on Audrey. Ted sets out to find a Truffula tree for Audrey in order to win her heart.

The environmental message in “The Lorax” thinly veiled. The people of Thneedville have to buy bottled air and most of the residents have no memory of real trees. Dr. Seuss stories often have some sort of political, environmental or social lesson at the roots, and this film is no exception.

Dr. Seuss had high standards for adaptations, so most of the film versions of his books were made after his death in 1991. “The Lorax” joins a long line of film adaptations such as “The Cat in the Hat” and “Horton Hears a Who”.