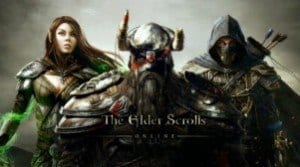 The Elder Scrolls is a storied franchise and, after the monumental success of TES V: Skyrim, has gained enough notoriety that a massively multiplayer online game seemed like a wise decision. Players love online experiences, players love The Elder Scrolls, what could go wrong? Strangely, The Elder Scrolls Online (ESO) is an awkward mixture of success and failure, providing a beautiful, active world for players to explore, but at the same time removing part of the charm that has graced the world of Tamriel since the beginning.

As an MMO, ESO is quite the cliche. That is, it falls into the trap of presenting itself as an easily recognizable MMO, complete with all the trappings that you’d expect from any one of a million others. The touch that makes it feel semi-unique is the first-person combat that TES has implemented throughout the series.

I decided to step away from my normal sword & shield-type class and focus on something that dealt more damage. A rogue-class is perfect for early gameplay in most MMOs and I assumed (correctly) that dealing high damage early on would render most quests easily playable by myself. After my time in Skyrim, I also assumed that ranged combat would allow me to keep a safe distance as I dropped my foes from afar. Here’s where my error began; adjusting aim at range is far more difficult in ESO than in previous single-player titles.

To ESO’s credit though, after realizing that I wasn’t skilled enough to be an archer (not my character, but me as a player), swapping to a dagger-wielding bad-ass was simple. Ranking your skills works the same as it has previously, as well. The more you use them, the better you get. You can also gain skills by reading books, another nod to the world that Bethesda has worked so hard to maintain.

Characters start all over the world, depending on their race, and Tamriel is enormous. Players familiar with the franchise will immediately start recognizing familiar places like Daggerfall and Morrowind. Similar to other popular MMOs like World of Warcraft, each area consists of questlines and dungeons that scale in difficulty as you venture farther and farther away from your starting area.

Unlike some other MMOs though, the world is grimey. Settlements and cities dot the landscape, each with varying importance, but the motif remains the same. It’s a harsh land and there’s rarely a situation where you feel like you’re in a beautiful place, even with the major cities.

Wandering through the medieval cities also sees you introduced to NPCs that are often asking for your help. Quests are the main way to level up, as in any MMO, and the task of completing them varies from simple “find and take” quests to your expected “Kill a certain number of bad guys”.

It would be far easier and perhaps more enjoyable if the stealth system worked in ESO as it does in other TES titles, but in the sake of balance the entire system was forced to be changed. That doesn’t mean the eyeball doesn’t appear — closed for hidden, open for visible — it just means that it doesn’t allow you to actually commit theft or accomplish sneak attacks.

The balance in question is due to other players and what it would to player vs. player combat. Rogue characters have a stealth ability that lasts only a few seconds, but I understand the change to the overall system. Imagine an arena filled with characters all “hidden”, waiting to spot an enemy. Matches would last hours.

Aside from that, a key piece of TES’ fun is completely stripped from the game. Theft. By hiding, normally you could steal anything that wasn’t nailed down, leading players to have bags filled with dinnerware, cheese, and all sorts of ridiculousness. With an MMO though, particularly one that sticks to the fundamentals like ESO, there’s rarely anything to pick up at all. The charm of seeing a beautiful shield or a deadly dagger lying around and concocting a brilliant plan to snatch it is gone, replaced with quest givers and sparkling bodies of equipment ready to be grabbed.

I love The Elder Scrolls and the idea that I could live in a persistent online world seemed brilliant. Because the game simply cannot exist as we’ve seen it prior to ESO, means that players expecting to have the same experience will be disappointed. The lore still exists, as does the first-person perspective, but overall the world seems busier. With thousands of adventurers vanquishing evil, if the online game was anywhere near as diverse as the single player stories we’ve come to love, it would be boring.