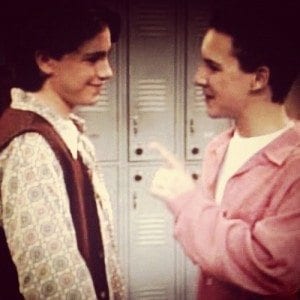 As for Mr. Feeny, Cory’s mentor teacher, Cory seems to have taken his place. Cory Matthews is ironically now a seventh-grade history teacher, with his daughter and her best friend in his class.

Whether Ben Savage or Danielle Fishel will be back to their infamous roles remains to be seen. However, there have been tweets to raise our suspicions. On November 3, Fishel tweeted saying, “Just want you guys to know that @BenSavage and I have talked and we’ve decided…Thanksgiving is going to be delicious this year!”

Since the series end in 2000, Ben Savage, who played the mischievous Cory Matthews, graduated from college and earned a political science degree from Stanford in 2004.

Savage’s love interest on Boy Meets World, Danielle Fishel, who played Topanga Lawrence, took a role in the film National Lampoon Presents Dorm Daze, but has since fell away from acting. Instead, Fishel has served as a special correspondent on The Tyra Banks Show, and was host of Style’s The Dish. She now appears on MSN TV’s Last Night on TV.

The Boy Meets World spinoff is set to start filming in 2013 and will hit Disney Channel by 2014.