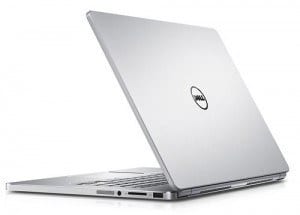 PC enthusiasts know how to find value from their rigs. For others, the price tag does all the talking, which is why when you’re a college student, sometimes budget outweighs the hardware. Last month I had an opportunity to get my hands on a Dell Inspiron Inspiron 14 7000-series notebook to determine if that line was worthwhile for the college lifestyle.

The Inspiron 14 7000-series line of products starts at $849.99, but the model I had my hands on was Dell’s highest tier. The size is the first thing you’ll notice when you receive the notebook. It’s small. Impressively small, in fact. It’s only slightly over four pounds and is easily carried or stored in a bag for travel. Granted, the lack of an optical drive helps cut down on the actual real estate it has to take up, but it’s less than an inch tall, even when closed.

The screen is slightly smaller than 14”, so for those who enjoy sprawling screens will assume that this is lacking. They’d be wrong, of course. With touch capabilities, the screen is durable and is a backlit LED. Surprisingly, it’s not Gorilla Glass, but is specially designed by Dell, called “Truelife” technology. It looks beautiful. Max resolution of 1920×1080 ensures a Hi-Def image so you can browse videos or watch Netflix comfortably.

The GPU itself is the Intel HD Graphics 4400 and it isn’t necessarily going to power your high-end gaming habits, but is passable for some titles. Batman Arkham City for instance, runs between 25-30fps, even during fight scenes or when gliding through Gotham. Metro Last Light on the other hand, even at low settings, stuttered to below 10fps. Depending on the title you’re looking to play, you may hit a wall. Intense visual titles like the Crysis series will be lacking, but for League of Legends or an MMO, it will suffice.

Powered by Intel’s 4th generation i7, the 4500U processor is also on the low end of the spectrum, holding a clock speed of around 1.8GHz. Built for notebooks, it’s surprisingly efficient. Windows 8.1, the OS included, runs lightning fast and can handle multiple commands at once, which is an attribute of the i7 4500U. It’s due to the max turbo frequency totaling 3GHz, meaning when your processor gets too “crowded” with information, it can speed itself up to 3GHz in order to meet your requirements.

The two biggest issues I have with the Inspiron 14 7000-series is the heat and the available ports. If you’re using the notebook for a moderate length of time, the surface between the keyboard and the screen will get noticeably hot. Not, “I’m going to burn your fingerprints off,” hot, but enough so that you won’t want to rest a hand or — if you’re insane — a candybar there (you know someone who would do this).

I was also disappointed that the notebook has only two USB 3.0 ports. There are no others, not even the nearly-obsolete 2.0 USB ports. They’re positioned so that one is on the right, one on the left. The positioning makes it clear that they put thought into the ports, but if others (even just one) were left out simply to save space, it seems a bit shortsighted. If you’re hoping to use a USB headset and mouse, that game controller will have to go. With so many accessories that are USB-dependent, having to choose two can really limit your experience.

The most surprising, and perhaps most important, aspect of Dell’s Inspiron 7000-series is the battery life. You want a notebook to have some juice; odds are you’ll be on the go. The battery included here is integrated (you can’t remove it) and holds 58 watt hours (WHr). In standby mode, even after five days, the battery was still over 80%. With moderate use — two to three hours a day, with no recharge — five days still had more than 60% usage. Granted, the screen was dimmer than normal and the usage was basic video and web browsing, but it’s still damned impressive.

The price of $1,049.99 might be a touch out of your price range, but Dell’s financing options are available and if you’d prefer a lower model, the options are there, but with obvious performance implications. The 500GB HDD is an average amount of storage to have, but you’ll see advancements in the coming months that may render it sub-par. Until then, combined with the 8GB of RAM, the Inspiron 14 7000-series notebook is definitely worth your attention.