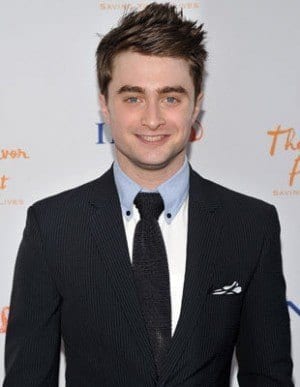 Daniel Radcliffe, star of the international box office breaking “Harry Potter” franchise, wants more out of life than being a movie star. Daniel Radcliffe has announced his desire to be a father and he wants it to happen as soon as possible.

“I like the idea of being a youngish parent so I’ve got energy to play football even though they’ll be better than me by the time they’re four,” Daniel Radcliffe said in a recent interview.

Daniel Radcliffe himself rose to fame playing Harry Potter at 11-years old. It was a role he played for over a decade and though ever grateful for the opportunity to be associated with such a successful series, Daniel Radcliffe has spent the past few years trying to break away from the character. Now, it seems, that Daniel Radcliffe has found acclaim outside of the franchise; he is ready to set his sights on personal matters.

Daniel Radcliffe is currently single and although he does not know “when or who,” he definitely knows he wants to have children before he turns 30. Daniel Radcliffe claims this desire stems from many of the close friends with whom he grew up having started families and seeing the stability it has brought to their lives.

“I’ve grown up around lots of people who were having kids when I knew them, because a lot of them were a lot older than me,” Daniel Radcliffe said. “And I saw the wonderful change in them. I see that it gives you a sense of purpose that up till now I only really get from work. I want that.”

However, don’t expect to see any tiny wizards whizzing about once Daniel Radcliffe becomes a father. He plans on supporting his children’s endeavors, but will not push them into the film industry. For now, the star just has to work on finding the right woman to make the goal possible.