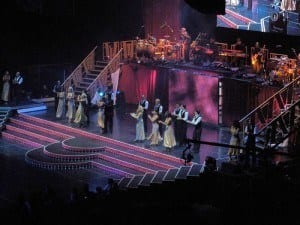 We all know that ending up on Dancing with the Stars is the last nail in the coffin of fame, so let’s see what careers are ending with this year’s season.  The announcement was made exclusively on Good Morning America, and the headliners include music legend Wyonna Judd, former “Idol” finalist Kellie Pickler, reality TV star Lisa Vanderpump and NFL star Jacoby Jones, according to ABC News.

“This is something I said I would never do, said Wyonna Judd to ABC News, “They’ve asked me for six years.  I’m trying to get back to my original weight of 8 lbs, 15 oz. because it’s the year of doing things that you’re scared of.”

In case you didn’t recognize many of this season’s names, here’s a run-down.  Raisman became a household name as part of the “Fierce Five” at last year’s Summer Olympics in London, where she took home a gold medal for her performance.  Professional boxer Victor Ortiz is a former welterweight champion, and Dorothy Hamill is best known for winning the 1976 Olympic gold medal in figure skating.

Comedians Andy Dick and D.L. Hughley, “General Hospital” star Ingo Rademacher and Disney star Zendaya Coleman are some of the biggest stars in the lineup.  Actor, producer, director and musician, Andy Dick, fronts his own comedy band and is known for appearing in a number of Hollywood blockbusters.

D.L. Hughley rose to fame on the much-loved sitcom, “The Hughleys,” and later became a television personality and political pundit.  Ingo Rademacher is best known for his longtime role as Jasper on General Hospital, and Zendaya Coleman was an actress, singer and dancer on Disney’s hit show, “Shake It Up.”

The new season premieres with a two-hour episode Monday, March 18 at 8 p.m. ET/7 p.m. CT on ABC.  The couple with the lowest combined scores and public votes for their performances will be sent home.