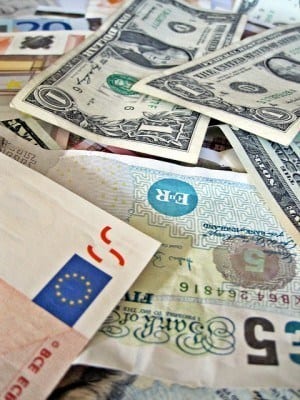 The government continues to print money with no value

Due to the United States printing of billions of phony paper fiat dollars a month with no intrinsic value we now have a monkey see monkey do with every central bank in the world printing money, trying to debase their currency. Stocks are running wild in almost every country creating this artificial economy that is not real, cannot last, and could cause worldwide devastation to our economies.   Now who do you think will get the blame when this all goes belly up?  Who will be the international pariah?  Who will the militants want to attack to do away with the Great Satan?

First Japan, then America, then the U.K., and of course now the E.U. have all gotten into the act that has spread like a plague across the planet.  Of course everyone in their right mind has to know that this will not end well.  What we have here is global economies robbing the working class of their hard earned money by debasing world currencies shrinking their spending power.  This is a worldwide bubble economy floating on a sea of artificial money that is losing its value.

In the Short Term

In the short run for Japan it has helped by driving down the value of their currency that for now keeps exports cheap to the rest of the world which keeps Japan’s population of 125 million working to stay above water. In the long run, however, it has rising debt, a shrinking population, and now with further debasing of the yen the price of imports will continue to rise shrinking their buying power slowly leading to the ruination of their nation.  It will not work in the long run as a stabilizing policy.

The People Who Did it Right are Getting Burned

The United States today cannot possibly pay off the national debt without a serious crisis.  We are the largest debtor nation in the history of the world; now do you honestly think this will all have a lollipops and rainbow ending?  The Fed’s zero interest rate is destroying the people who saved and invested all their lives.  A lot of people were frugal did not get over extended; did not go out and buy five houses with no money, no job, while running up huge debts. It is those people that we are now bailing out with taxpayer dollars; the working stiff that done it right has been destroyed financially in the process.

Thomas Jefferson Clued Us In

One of the founders of our country clued us in way back when by stating, “Paper is poverty…It is only the ghost of money and not money itself.”  So how many lives does this ghost money have?  There is a revolution coming called M-commerce that will be a form of electronic payment with no exchange of anything of intrinsic value involved.  Smartphones and iPhones have led the way.  The specter of electric money is haunting the world; a one world fiat money is on the way; a one world electronic payment system with only one way to pay is coming to fruition on the horizon.  Perhaps to rescue us from what we have become or possibly to enslave us all.  Only the future knows.