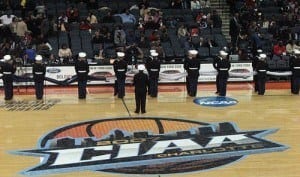 they’re on your side

Nationwide has remained the official insurance provider of the CIAA, they write on their website, “The CIAA is the oldest African American athletic conference in the nation and is committed to the development of future leaders. To support this endeavor, Nationwide has provided over $600,000 in scholarships to student athletes in the last five years.”

“We are proud to contribute $120,000 to the CIAA scholarship fund that helps students pursue the education that is crucial to their future,” said Lee Morton, the regional vice president for Nationwide Insurance.

The Nationwide sponsorship has continued to support recruitment efforts, such as providing students with summer corporate internships at Nationwide along with on site job fairs, and have offered sponsorship to the many sports events through the CIAA.

With the CIAA basketball tournament in full swing, Nationwide is proud to enhance the experience. There are a wide range of activities during this years tournament that fans can get involved in- networking with business, spirited shows, concerts, reunions, expos, and other celebrations- that 175,000 people are expected to attend.

Nationwide is on your side, and they are on the side of the CIAA.

Nationwide, along with Allied insurance released reports responding to the Midwest storm and both are doing everything possible to expedite any processes with representatives available 24/7 in the need of an insurance claim.