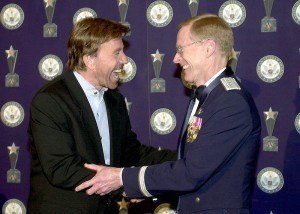 Chuck Norris is so tough…

Chuck Norris is so tough, he can hold several pedestrians and cyclists while stretching across the river dividing Slovakia and Austria.

Okay, maybe Chuck Norris can’t do that, despite all of his legendary toughness. But Chuck Norris is so tough, that the Slovaks want to name a bridge after him.

The Chuck Norris Bridge would be a pedestrian and cycling bridge, spanning the Morava River.

The name of the bridge was left up to the general public by way of an online vote. Two other names have been put forward, but Chuck Norris is currently in the lead with an overwhelming 74 percent of the votes.

Maria Theresa, an Austro-Hungarian empress, and the Devinska cycling bridge, named for the nearest village, are the other two names in the running.

So, will the “Walker, Texas Ranger” star Chuck Norris be immortalized by a bridge?

Ultimately the final decision will be made by a regional assembly. However, Governor Pavol Freso has said that the assembly would follow the wishes of the public.

“The same way as we have so far been building it in full sight of the public, we will seek that the name is accepted by the public as well,” the governor said.

Chuck Norris has been the source of online memes for years, and apparently he’s just as huge in Slovakia. Chuck Norris jokes about male strength and masculinity have become as iconic as the action film star himself.

Voting for the name of the bridge will run until April, but if current rankings are any indication of the outcome, Chuck Norris will win by a landslide.