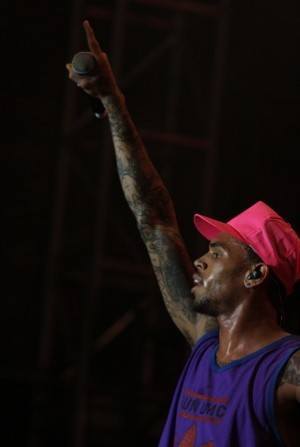 Chris Brown claims he’s quitting music. I didn’t know he was still in the music industry.

The rapper spent a full 45 minutes in jail on Monday for a hit and run. This morning he decided that enough is enough.

That could actually happen. Chris Brown hasn’t been in the spotlight too much since his little “misunderstanding” with then-girlfriend Rihanna. But he hasn’t managed to get away from the stigma of it.

“Being famous is amazing when it’s for your music and talent. I’m tired of being famous for a mistake I made when I was 18. I’m cool and over it!” Brown also tweeted.

It’s fair for him to be frustrated by all the bad publicity that’s been following him around since he assaulted Rihanna in 2009. He was just a kid (not that that’s an excuse. He should have known better.) But it was a one time event, and he doesn’t seem to be repeating his mistake.

Now I am not a fan of Chris Brown in any way. I couldn’t care less if he quits making music.  I just don’t really believe that he’s going to quit.  This little tantrum could give his album momentum and sales. Good sales means he’ll make another album. Bad sales….

We’ll have to wait and see what happens. Chris Brown’s album, X, comes out on August 26.

Previous ArticleThe Hunger Games: The Summer CampNext Article"Fatberg: The Movie" coming to a sewer near you