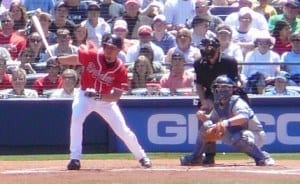 After 18 long seasons with a single franchise- the Atlanta Braves, and his seemingly ambidextrous hitting style, the third baseman Chipper Jones plans to retire at the end of the 2012 season.

“Never in my mid-20s would I have given myself a snowball’s chance to be in camp and have a job at 40 years old,” Jones told The Associated Press during the start of this years spring training. “But I like to think I’ve kept myself in pretty good shape over the years. The skills are still there to go out and get it done. I don’t know for how much longer, but we’re gonna ride it as long as we can.”

Chipper Jones was a seven time all-star who won the rookie-of-the-year award in 1995 and was named the National League MVP in 1999. It would appear, along with his switch hitting skill- the only switch hitter with more than 300 home runs and a career batting average over .300, and dedication to one franchise, that the 39-year-old is a shoo-in for the hall of fame. “No doubt,” Cox said about Chipper Jones going in the hall of fame. “A switch-hitter who has played on winners and done everything he’s done.”

Chipper Jones battled injuries throughout his career and even announced back in 2010 that he was planning on retiring, only to retract that statement later. He initially was placed as a left fielder but suffered a season ending knee injury that would move him to the third base position.

Chipper Jones led the Braves to their first World Series championship in 1995 and appeared in the series two more times in his career.