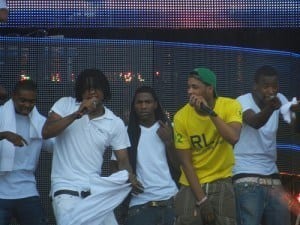 Chief Keef, a 17-year old rapper from Chicago, remains under investigation by city police regarding the death of rival rapper Joseph “Lil JoJo” Coleman. Coleman, a resident of the nearby Altgeld Gardens neighborhood on Chicago’s south side, was gunned down as he rode on the back of a friend’s bicycle in early September.

Both hailing from the South Side, Chief Keef and Lil JoJo had inner city aggressions pent up inside of them. An in a crime-torn neighborhood that in recent years has seen its murder rate increase as the overall city crime rate decreased, the life expectancy is at a disturbing low for many youths.

The beef between Chief Keef and Lil JoJo is reminiscent of 90s era gangsta rap, where rappers wrote about their lives and struggles in the inner city, gang life and run-ins with the police. But this feud is one that ends in tragedy as gang affiliation looks to be the culprit in the teenage rapper’s death.

For some, living in an economically struggling neighborhood like Englewood poses little escape, and often its residents fall victim to the neighborhood’s violent surroundings. For Chief Keef and Lil JoJo, who received record deals before they were even old enough to buy cigarettes, music was the way out. Unfortunately, gang violence, often a prevalent theme in Keef’s and JoJo’s music claimed the teenager’s life.

JoJo’s first rap song, “3HunnaK,” was posted on YouTube and served as a taunt to the Black Disciple gang, “300” being street slang for the BDs. The added “K” stands for killer, as the line in the song states, “These n—— claim 300, but we BDK.”

Anyone who has ever learned anything about street gangs and gang violence knows that there is always retaliation to follow. And that is precisely what followed as Lil JoJo, who rode to Englewood from his home in Altgeld Gardens on the pegs of a friend’s bike. At around 7:30 pm on Tuesday, September 4, JoJo was shot when a gunman fired six to seven shots, striking the teen in the back.

JoJo, who had been taunting a rap associate of Chief Keef in the months preceding his death had been exchanging “diss” videos via YouTube targeting the Black Disciples.

Hours after JoJo’s death, Chief Keef posted on his Twitter account, “Its Sad Cuz Dat N—- Jojo Wanted to Be Jus Like Us #LMAO,” leading Chicago police to open up an investigation into the rap feud.

Many have since boycotted Keef’s music, calling for Interscope Records to withdraw their contract with the teenage rapper following his mockery of another person’s death. Interscope, the same label that housed Dr. Dre, claims that it will not tolerate another East vs. West rap feud, the one that claimed the lives of Tupac Shakur and Notorious B.I.G.

Some have even glorified the situation between gang tensions and rap music, saying that it sells records. But when is enough finally enough? It seems that only when it’s too late.