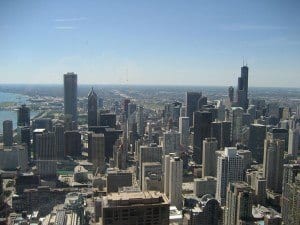 13 were shot within 30 minutes, continuing a violent year in the Windy City

The Chicago shootings took place between 5:15 p.m. Thursday and 1:45 a.m. Friday, CBS Chicago reported. All of the victims were aged 14 to 28, and most were male.

Thirteen people were shot between 9:15 and 9:45 p.m., during which time a drive-by shooting at 79th Street and Essex Avenue wounded eight. Police have said that the drive-by was gang-related and are searching for two suspects.

“It looks like officers were in the area when they heard the gunshots and came upon the scene,” Chicago police public affairs officer Jose Estrade said to AFP. “Right now, there’s nobody in custody — it’s an ongoing investigation.”

Another drive-by occurred in the 2900 block of West 39th Place in Brighton Park, wounding two, according to the Chicago Tribune.

The string of incidents began at 5:20 p.m. Thursday in Little Village, where four men were shot and wounded. The other Chicago shootings took place at the 600 block of East 37th Street, the 7200 block of South Jeffery Boulevard, the 7100 block of South Vincennes Avenue, and the 3500 block of West Grenshaw Street.