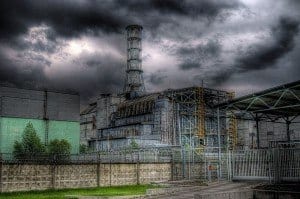 Construction at the infamous Chernobyl plant started Thursday. Ukraine is planning to build a permanent shelter around the fallen nuclear power plant, which just had its 26th anniversary.

“In the name of Ukraine, I express my deep thanks to all the donor countries to the Chernobyl Shelter Fund for their understanding and effective aid to our country in overcoming the consequences of the worst man-made disaster in human history,” President Viktor Yanukovych said during a ceremony at the site.

Chernobyl fell on April 26, 1986 when an explosion during a test sent radioactive fallout into the atmosphere. European countries such as Belarus, Ukraine and Russia were horribly affected. After the explosion, Ukraine ordered thousands of people to participate in the clean-up without proper protection.

The push to raise money for the new structure as received international support, given that the original structure was poorly built and has since cracked. International donors have committed to contributing $773 million to the build.

“The Chernobyl disaster underscored that mankind must be extra careful in using nuclear technologies,” Yanukovych said. “Nuclear accidents lead to global consequences. They are not a problem of just one country; they affect the life of entire regions.”

The construction of the new shelter has been dubbed the “New Safe Confinement” site, which will span 257 meters and last a century. The name of the original structure roughly translates into “casket” in English.

Countries such as Belarus as still feeling the aftermath of Chernobyl with contaminated areas of the country known as “exclusion zone.”