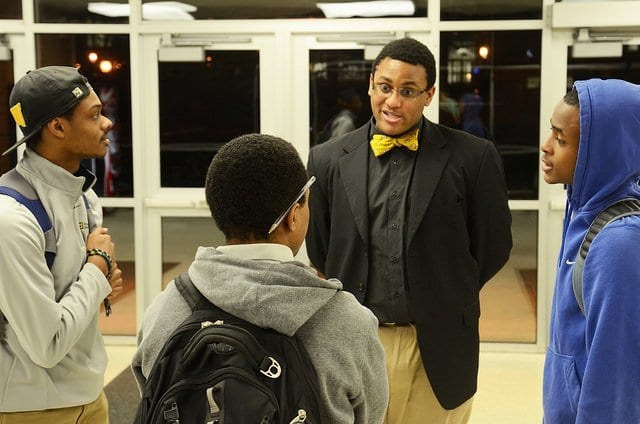 Black Americans are increasingly uneasy about race relations in the United States, ranking that as the nation’s No. 1 problem along with unemployment, according to a new Gallup poll.
Much of their concern, which began growing last year, is driven by highly publicized police shootings of unarmed black men, Gallup reports.
The fact that race relations ranks so high is not surprising because of how often the news and entertainment media highlight stories that associate black men with violence, crime and poverty, says Trabian Shorters, founder and CEO of BMe Community, a network of all races and genders committed to building better communities across the U.S.
“When black males are portrayed everywhere we look in a negative light, our brains – no matter our race or sex – are prone and primed to believe that this portrayal is correct, even the norm,” Shorters says. “In fact, it’s not. Not by a long shot.”
One way to address the problem is to update the narrative with a more full picture of black men and boys, says Shorters, who also is co-editor with Ben Jealous of the book “Reach – 40 Black Men Speaking on Living, Leading and Succeeding” (www.Reachwithus.com).
Just as an example, he says, more than 80 percent of black males 25 and older have at least a high school diploma. And a much-repeated myth – that there are more black men in prison than in college – is not true and probably never was, according to a study by Ivory Toldson, a professor at Howard University.
The United States is bursting with black males who are educated, good businessmen and great fathers, yet their contributions to society are overlooked, Shorters says.
He cites several reasons why America needs to update the way it views black males:
•  The nation is in the middle of perhaps its biggest cultural transfer in history. Over the coming years, the baby boomers will give way to the millennials as the largest generation in history. As that happens, America will no longer have a racial majority. “All of the social myths will be updated for better or worse,” Shorters says. “If we make a concerted effort to understand each other over the next decade, I think we can change them for the better.”
•  Recognizing that black men are assets opens up opportunities for all people to build better cities by working with those black men who are willing to uphold important values and take constructive action. “We must stop ignoring the overwhelming amount of good that black men do for our country,” Shorters says.
•  Letting go of stereotypes about black males will help more than just black males. Valuing all members of the human family is the most prosperous way forward for a nation as diverse as the United States, Shorters says. All of us should reject any narratives that denigrate people and prejudice one group against another. “That’s why at BMe Community we are committed to working with people of all races and genders to bring about a more caring and prosperous country,” Shorters says.
“We can each be the hero in the story of America’s future,” Shorters says. “As black men and as a nation, our challenges are real, but our contributions are more real. What you focus on has power over your life. So, as black males and as Americans, we make our future when we make our choice.”
About Trabian Shorters
Trabian Shorters is co-editor with Benjamin Jealous of the bestselling book “Reach – 40 Black Men Speaking on Living, Leading and Succeeding” (www.Reachwithus.com). He also is a social entrepreneur with more than 20 years of experience in diverse fields including national service, technology, nonprofit, philanthropy and social entrepreneurship. In 2011 he launched BMe Community while serving as vice president at the John S. and James L. Knight Foundation. Shorters left the Knight Foundation in July 2013 to focus on growing BMe Community. BMe builds caring and prosperous communities inspired by black men. As vice president of communities for Knight Foundation from 2007-2013, Shorters directed a $300 million portfolio in 26 cities as well as the field-leading Knight Community Information Challenge (KCIC), which enticed more than 300 foundations to experiment with funding news projects. He graduated with honors from Michigan State University in 1991 with a degree in journalism. He is also a Cranbrook Educational Community graduate and a 2015 Ashoka Fellow.
Previous ArticleShame on YouNext ArticleThe Trophy Wife: Understanding womens' role in modern professional sports