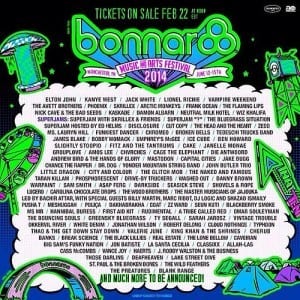 Bonnaroo 2014 is set to touchdown in Manchester, Tennessee from June 12-15. The full lineup was just announced and Kanye West, Elton John and Jack White are leading the pack as headliners. Note that this is the same Kanye West whose headlining set at Bonnaroo six years ago, left disappointed fans waiting for West to show up for an 8:45 p.m. set. West ended up hitting the stage at 4:45 a.m., which was a full 8 hours after his previously scheduled time.

This caused Kanye West to go on a full out caps lock tirade against Bonnaroo on his blog, which included the likes of, “WE WERE OBVIOUSLY DEALING WITH FUCKING IDIOTS WHO DIDN’T REALLY HAVE THE CAPACITY TO PUT ON THE SHOW PROPERLY,” Kanye passionately typed. “THEY TRIED TO GIVE ME A TIME SLOT WHERE IT WAS STILL LIGHT OUTSIDE…I HAVE A FUCKING LIGHT SHOW DUMB ASS, IT’S NOT CALLED GLOW IN THE DARK TOUR FOR NO REASON SQUID BRAINS!”

Well, said squid brains have since booked Kanye again, and fans can also expect to see the legendary Elton John performing a set. Wiz Khalifa, Skrillex, phoenix, Disclosure, Chromeo, The Glitch Mob, Washed Out and The Flaming Lips are also going to play to hundreds of thousands of excited music fans during those spectacular three days.

Check out the full lineup HERE and let us know who you are excited to see at Bonnaroo 2014!

Previous ArticleIt’s Not About Getting A Job, It’s About Finding a Vocation!Next ArticleBrilliant Location for Girl Scout Cookie Business Empire