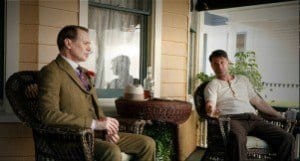 And it’s kind of poorly dubbed

HBO has released a full-length trailer for the fourth season of Boardwalk Empire, which premieres September 8th. The trailer brings us familiar characters such as Steve Buscemi’s Nucky Thompson, as well as new ones such as Jeffrey Wright’s Dr. Valentin Narcisse.

Boardwalk Empire’s new season seems to be placing Nucky back on top as the King of Atlantic City, having overcome the forces of the completely asinine and cartoonish Gyp Rosetti. Rosetti’s trademark seemed to be beating the shit out of anyone who looked at him the wrong way, which made the show become something of a farce. Hopefully Boardwalk newcomer Jeffery Wright will be a more welcome addition this season.

Jeffrey Wright isn’t the only actor having his freshman season on Boardwalk Empire. Office Space star Ron Livingston will also be appearing this season, and what brings him to town is “not exactly a national secret,” as he puts it; which might as well make it a national secret.

One character who is decidedly missing from the trailer is Margaret Schroeder/Thompson/Schroeder again. The resident female protagonist of Boardwalk Empire recently hit splitsville with Nucky Thompson at Season 3’s end.

Hopefully her character’s story isn’t over yet. However, if you check out the trailer’s comment section you’ll find quite a few viewers pleased at her absence. Probably because girls are not as cool as guns are – POW POW! BANG BANG!

Also not featured in the trailer is Michael Shannon’s former Agent Van Alden. Since being on the run from Johnny Law, Van Alden has been appearing more and more infrequently, implying that someday he may very well evaporate into the mist.

Much to my dismay it would also seem that Boardwalk Empire’s viper/mommy dearest/murderer Gillian Darmody is still alive and kicking, unfortunately. She is the worst.

One thing that bothered me about the trailer was the shoddy job they did with their audio editing. The lines are so clearly cut and paste as HBO saw fit that it sounds like robot gangsters performing them.