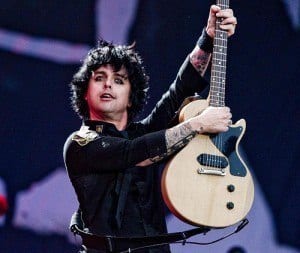 The Green Day singer freaks out at iHeartRadio Festival

Billy Joe Armstrong of Green Day made a scene during the band’s performance at the iHeartRadio Festival in Las Vegas resulting in a viral YouTube video, a smashed guitar and a trip to rehab.

After venting, Billy Joe Armstrong smashed his guitar into the stage’s floor and stormed off the MGM Grand stage. Two days after his explosive performance at the festival, Armstrong is heading to rehab.

The band released a statement on their website: “Billie Joe is seeking treatment for substance abuse. We would like everyone to know that our set was not cut short by Clear Channel and to apologize to those we offended at the iHeartRadio Festival in Las Vegas.  We regretfully must postpone some of our upcoming promotional appearances.”

Despite the statement’s remorse over the lead singer’s outburst, the media seems to view Billy Joe Armstrong’s actions and words as a righteous display of punk rock fundamentals. Clear Channel and the iHeartRadio Festival endorsed the scene on its Twitter, tweeting “WOW!!!!…and the guitar is officially broken.” IHeartRadio also applauded the performance on the social media site, calling it “one of the most epic, punk rock sets in recent memory” on their twitter.