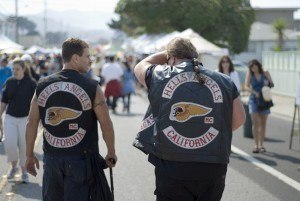 for the killing of a fellow member during a funeral

A Hells Angels motorcycle gang member suspected of slaying another member during a funeral service in San Jose has been arrested this past Sunday.

Stephen Ruiz, 38-years-old, known to be the “biker gang fugitive” was taken into custody at the Days Inn motel for the Oct. 15 murder of Hells Angels member Steve Tausun, 52-years-old. According to the San Jose Police Department spokesman Jason Dwy, “The victim and suspect…reportedly became involved in a physical altercation,” and the alleged suspect Ruiz pulled a firearm and fatally shot Tausun.

A worker at the Days Inn hotel Rey Bayangos reported to MSNBC on the arrest saying, “[The police] used the phone at the front desk, called and asked him to surrender peacefully, and he did surrender.”

The funeral Ruiz and Tausun were attending was for Jeffrey “Jethro” Pettigrew. He was the president of their Hells Angels chapter and at age 51 was gunned down by a rival Vagos motorcycle gang member during a fight last September at a Nevada casino.

The U.S. Justice Department labeled both the Vagos and Hells Angel gangs as outlaw motorcycle clubs involved in drug, weapons trafficking and other criminal activities. The two have had an ongoing slew of gang rivalry related crimes against each other- a January fight at a Santa Cruz Starbucks and another incident in August led to five individuals with gunshot wounds in Chino Valley. Pettigrew would be found dead almost a year later.

The biker gang fugitive is just one member of an estimated 2000 Hells Angels spread out across the word with 230 chapters.

Their primary motto is “When we do right, nobody remembers. When we do wrong, nobody forgets.”

Tensions between Vagos and the Angels have been on the rise, but these recent crimes and deaths will surely be remembered.