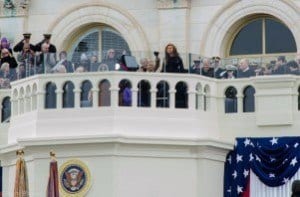 Beyonce’s lip-synced performance of the “The Star Spangled Banner” at President Barack Obama’s inauguration caused much controversy, with a plethora of backlash and support coming in from fans and other stars, alike.

According to the U.S. Marine Band, Beyonce did lip-sync to a pre-recorded version of the national anthem at the inauguration.

However, according to fellow singer Aretha Franklin, lip-syncing is fairly commonplace for singers to do and should not come as a surprise, given the conditions.

“I thought it was funny because the weather down there was about 46 or 44 degrees, and for most singers, that is just not good singing weather,” she told ABC News.

Singer Myleene Klass agreed, tweeting, “I don’t get what’s outrageous about lip-syncing to your OWN vocals?”

Singer LeAnn Rimes told late night talk show host Jimmy Kimmel that the decision to lip-sync might have been imposed on Beyonce.

“There are times when people will ask you to do it, and they will not let you [perform] unless you do it because they want control over what happens,” Rimes said.

Master Sgt of the Marine Band Kristin duBois told ABC News that the band’s music was also pre-recorded for the national anthem, but the band did play live for the rest of the inauguration’s music.

Representatives for Beyonce have yet to comment on the lip-syncing incident.

“[Cold air] restricts the cartilage and can sometimes create variances that way, or difficulties for singers to be able to perform well outside,” Smith said. “[‘The Star Spangled Banner’ is] a song that spans about 1.5 octaves, and it kind of scares most singers to death just because of where it hits them in their voice.”