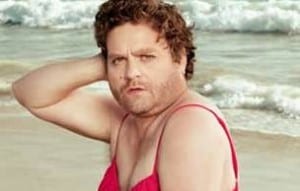 30-minute special aired before the Comedy Awards on Sunday

Between Two Ferns, the internet show by Zach Galifianakis, has finally found its way to a bigger screen. Between Two Ferns debuted a 30-minute television special, “A Fairytale of New York,” on Sunday night before the Comedy Awards on Comedy Central.

Between Two Ferns saw three big names for its debut episode: Tina Fey, Sir Richard Branson and Jon Stewart. Zach Galifianakis asked the pressing questions like how much Sir Richard Branson makes or if Jon Stewart thinks Bill O’Reilly smells like mothballs or a moth’s balls. The air of awkwardness that Galifianakis has perfected so well in Between Two Ferns definitely didn’t hurt the show’s success. The first television episode also saw the genuine hatred of Galifianakis from its celebrity guests that Between Two Ferns’ fans have come to expect. Jon Stewart puts down Galifianakis’ movie career by saying that he is only successful because he carried something that people like; a monkey and a baby. “Do you think I would have been cut out of First Wives’ club if I had been carrying a baby?” Stewart asks.

Although Between Two Ferns has taken a year-long hiatus, Galifianakis’ show has remained popular. The show where Galifianakis interviews celebrities literally between two ferns has won several awards, including a nomination for “Best Viral Original” at this year’s Comedy Awards.

Director Scott Aukerman is the man responsible for making Between Two Ferns a real comedy show. It is unclear whether Between Two Ferns will permanently be on television or if it will continue to delight us, online, four minutes at a time.