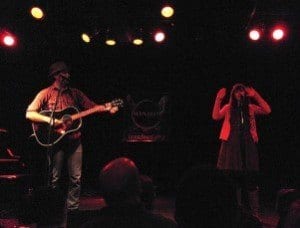 Ben Gibbard and Zooey Deschanel have been married for two years

Spinner reports that a source divulged that the split between the indie rock couple was mutual and amicable, “There was no third party involved.”

Gibbard and Deschanel were married in September 2009.

Gibbard spoke of Deschanel in May of this year, saying, “Zooey is really great at many things musically. One thing that I’ve certainly learned from her is that she has an amazing sense of harmony. She’s really great at layering vocals and it’s something that I’ve watched her do and have been very inspired by. And also she has a really amazing mind for chord structure and arrangements. It’s not so much that I will write a song and play it for her and have her give me notes, it’s more that I watch watch her process and glean little things from it that I like.”

Gibbard is best known as a member of the indie rock bands Death Cab for Cutie and the Postal Service. Deschanel is a singer in her own right as the titular ‘She’ in the duo She and Him. Deschanel is also the star of Fox’s new sitcom “The New Girl.”

Read more about the split between Ben Gibbard and Zooey Deschanel here.